"You spit on mercy? Then you will have NONE. You want carnage?! Garrosh will get more blood than he EVER bargained for!"
For other appearances of Jaina, see Jaina Proudmoore (disambiguation). 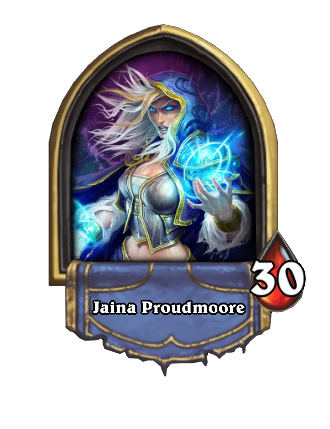 One of the most powerful magic-wielders on the face of Azeroth and Princess of Kul Tiras, the once kindhearted and compassionate Jaina Proudmoore has mastered the arcane arts, fought against demons of the Burning Legion and the undead Scourge, and gained a newfound fury towards the Horde after the destruction of her beloved Theramore.

As a child, Jaina showed great aptitude for magic and much compassion for her people. She was sent to Dalaran—a powerful kingdom and a haven for magi—to learn how to harness the powers of the arcane. The leader of the Kirin Tor,

Archmage Antonidas, sensed great potential in Jaina and accepted her as a pupil. Studious and talented, Jaina immediately took to the arcane arts. Her studies and responsibilities consumed most of her waking moments, leaving little room for mundane pursuits.

Jaina returned with help in the form of

As Jaina helped the refugees rebuild, the tensions between her people and the Horde slowly resurfaced. To ensure the safety of her people, Jaina forged an alliance with

Thrall, the Warchief of the Horde. These issues only increased when the Horde’s Champion,

Rexxar, claimed that humans were sent to assassinate him. Jaina knew nothing of this assassination attempt, but offered to assist Rexxar in discovering who was truly behind the attempts on his life.

After her father’s death, Jaina maintained the uneasy alliance between Theramore and Orgrimmar, knowing that the combined might of an allied force was more powerful against potential threats than a people divided. That alliance was invaluable when the Scourge rose up in the icy continent of Northrend. A terrifying echo of her past led the undead forces—Arthas Menethil, now

The Lich King. Jaina was determined to save her former love from the curse that gripped him, but it seemed like there was nothing left of the Prince of Lordaeron. Nevertheless, Jaina assisted in leading Alliance forces into the heart of Northrend to purge the land of this encroaching evil. Once their forces were victorious, a search of the Lich King revealed a small token, providing Jaina with hope that some remnant of the Arthas she once loved remained—a locket she had bestowed upon him in days long past.

When the leadership of the Horde was bequeathed to

Garrosh Hellscream, the new Warchief took it upon himself to swiftly and brutally eliminate the Alliance presence on Kalimdor, starting with Theramore. Garrosh’s forces developed a mana bomb that he dropped upon the unsuspecting city, swiftly and brutally wiping Theramore off the face of Azeroth. Countless lives were gone in an instant. Jaina barely survived the blast, but she would be changed forever; her hair and her eyes became stark white, and her outlook towards the orcs and the Horde changed from peaceful and understanding to ruthless, brutal, and cold. 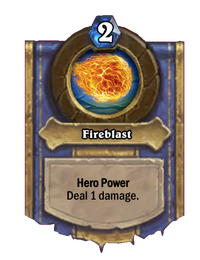 When viewed in the Collection, Jaina Proudmoore has the following flavor text: