Hearthstone Wiki
Register
Don't have an account?
Sign In
Advertisement
in: All cards, Wild format cards, Pages with unknown cards

This article is using {{Card template}}.
See Help:Style guide/Card for how to edit this kind of article.
Edit this article
Jade Shuriken
40698 • CFM_690
Regular 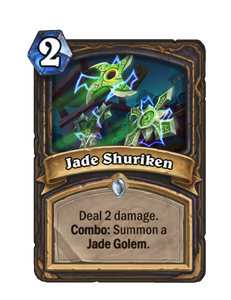 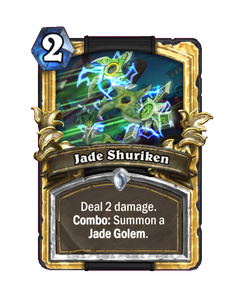 Good news is, after you remove it from your wound, you can use it to pay your medical bills! 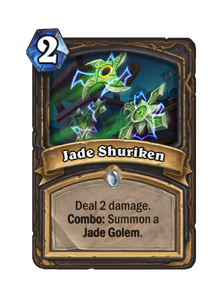 Jade Shuriken is a common rogue spell card, from the Mean Streets of Gadgetzan set.

In the early game, this card can be used as removal for your opponent's early minions, allowing you to gain board control. Whenever possible, ensure the Combo activates, because this not only generates a (small) Jade Golem for you, it also scales your future Jade Golems.

In the late game, the damage can be used to facilitate better trades on the board while at the same time summoning a potentially very strong Jade Golem.

With a Spell Damage boost, this card can be a very effective removal against medium-large threats.