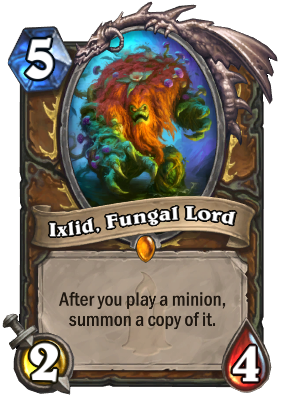 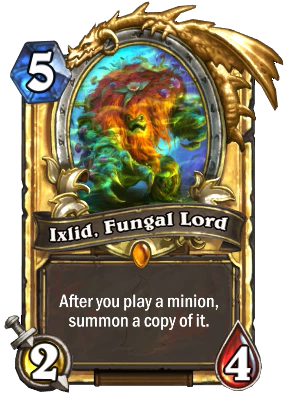 Collectible • Elite
After you play a minion, summon a copy of it.
Flavor text

We suggest crafting Ixlid; he'll grow on you. Literally.

For the boss of the same name, see Ixlid.

Ixlid, Fungal Lord can be obtained by:

There are two main ways to utilize Ixlid: either with cheap big minions like Arcane Giants, or as part of a OTK combo.

For the first, Ixlid can be put into a Miracle Druid deck that runs cards like Gadgetzan Auctioneer, Innervate, Arcane Giant, and Arcane Tyrant, as well as other obviously strong Druid cards to ramp mana, remove enemy minions, etc. You play Ixlid, then you play an Arcane Giant for 0 and get another Arcane Giant, and you still have 5 more mana on your turn after summoning 18/20 worth of stats off 2 cards. Plus the Ixlid threatens even more broken stuff the next turn.

For the second type of combo, we can look to Twig of the World Tree (brought down to 1 durability from a few turns of attacks), Ixlid, Faceless Manipulator (on the Ixlid to get 2 more Ixlids), and Malygos (after breaking the Twig to refresh your 10 mana crystals). This should give you 4 Malygos for +20 spell damage so that your 2 Moonfires can deal a total of 42 damage to your opponent's face.

Ixlid, Fungal Lord is unique to Hearthstone.[1] Unlike tar and bog monsters such Loatheb or Fen Creeper, which are physical creatures or magical entities, Ixlid is an ancient earth elemental spirit animating some of the rot and decay in the swampier parts of the catacombs.[2]

In a tale told by a dwarven bard, while adventuring in the catacombs, Marin the Fox was transported by an underground river into the edge of a cavern blooming with huge, glowing mushrooms. Marin noted that the Fungal Lord Ixlid was rumored to frequent such places, which he felt was an excellent reason to avoid them.[3]