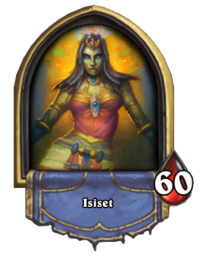 In the deft hands of the Mistress of Magic, any spell can be a Twinspell.

Isiset is a boss that can be encountered initially in Chapter 4 of Tombs of Terror. After completing Chapter 4, this boss encounter will be available in any completed chapter.

Isiset
Gaze to the heavens! What do you see?

Your bumbling taints the magic you wield!

Isiset
Speak the language of magic, not nonsense.

Isiset
These Halls will be your tomb!

Isiset
Bask in my radiance!
I wield the arcane infinite.
I wield the fabric of magic.
Insignificant!
The stars align for your destruction.

Isiset
A more powerful enemy lies deeper inside.
The plagues have empowered me...

Do your eyes deceive you?

Your "magic" is pitiful!

Arcane magic bends to the will of Titans.

An Aspect of Magic?! Hah!

If only you could cast that again.

Disks of Legend or Disks of Swiftness

You would use our power against us?

Isiset
The glimmer of your life, extinguished.

Isiset - a titanic watcher - is a boss of the Halls of Origination in World of Warcraft: Cataclysm.

Isiset along with the other constructs were created to protect the powerful device capable of resetting all life on Azeroth. Her sphere of influence is magic.
Isiset serves to regulate the arcane energies contained within, and produced by, the Halls of Origination. Legend has it that this construct has become enraptured with her own arcane mastery and the perfection with which it seemingly endows her.