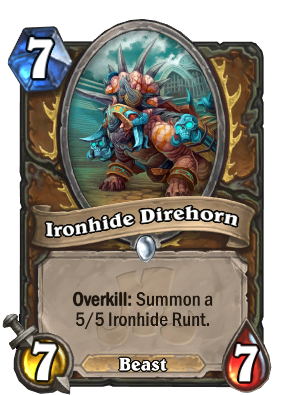 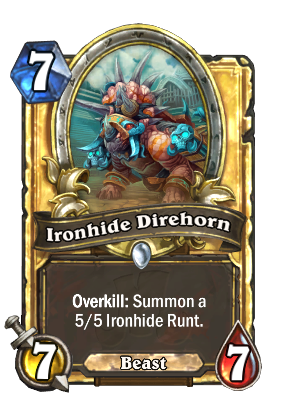 "Boy! Bring me my masks and skull rams."

Ironhide Direhorn is a common druid minion card, from the Rastakhan's Rumble set.

Ironhide Direhorn can be obtained through Rastakhan's Rumble card packs, or through crafting. 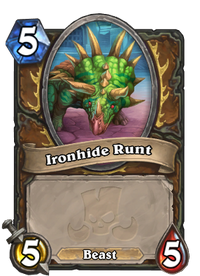 Direhorns, also known as triceratops, are three-horned dinosaurs found mainly on Zandalar, the Isle of Giants and the Isle of Thunder. These saurian titans populate many islands in the South Seas. Though they can seem like gentle giants, they are among the toughest and strongest of all things that walk on Azeroth. Even at a tiny size, direhorns are known to wreak havoc on unsuspecting victims.

The Zandalari trolls are regarded for their beast taming, and one of their greatest allies is that of the direhorn. With plated skin that can be harder than plate armor and spikes protruding from various directions, direhorns offer protection both for themselves and their masters. It was custom for a direhorn's future master to be the first to see it when it broke free from its shell. The Zandalari breed specific direhorn species for their small size for use as mounts. A common coming-of-age rite among the Zandalari is to travel to one of the violent, beast-ruled islands near the capital to steal or subdue a wild creature, such as a direhorn or devilsaur. Before a Zandalari sets out to tame a direhorn, they are known to traditionally carve sigils into their arm with ceremonial horns, speak to a bestial loa, drink a wild draught, wear a twin-tusk mask, and "roar with the inner voice". There is an old Zandalari saying about wild direhorns: "Run!"

The Zandalari recently deployed direhorns for use as living war engines to aid them in defending the Throne of Thunder and their mogu allies on the Isle of Thunder.