Hearthstone Wiki
Register
Don't have an account?
Sign In
Advertisement
in: All cards, Wild format cards, Pages with no result queries, Dwarves

This article is using {{Card template}}.
See Help:Style guide/Card for how to edit this kind of article.
Edit this article
Ironforge Rifleman
339 • CS2_141
Regular 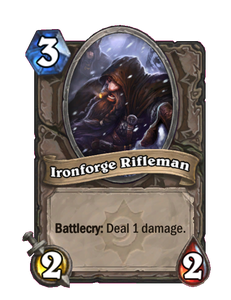 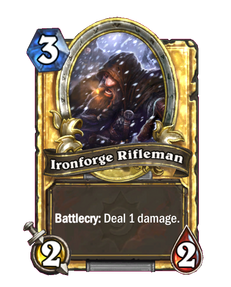 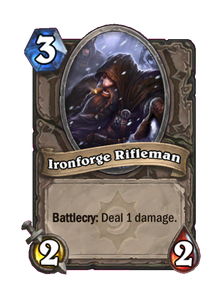 Ironforge Rifleman is a neutral minion card, inducted into the Legacy set, formerly from the Basic set. 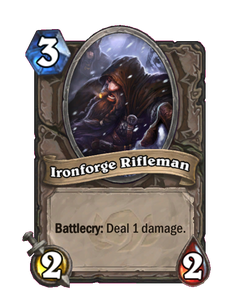 Regular and golden Ironforge Rifleman are uncraftable and cannot be crafted or disenchanted.

The main strength of Ironforge Rifleman lies in its Battlecry, which can be used to deal a single point of damage to any character. This is particularly useful for picking off low-health minions without taking damage, removing Divine Shield, and for attacking targets behind Taunts. It can also be useful for triggering Enrage effects on the player's own minions. When played against a 1 health minion, Ironforge Rifleman's Battlecry can allow him trade for at least 2 cards, generating card advantage.

Later expansions have rendered Ironforge Rifleman too inefficient to use outside of Arena and has seen better replacements:

Ironforge is the capital city of the dwarves, a member of the Alliance. It is the ancestral home of the Bronzebeard dwarves. The Council of Three Hammers rules the kingdom of Khaz Modan from the throne room within the city.