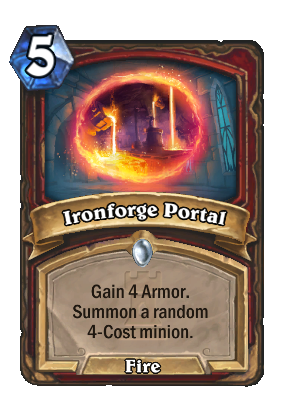 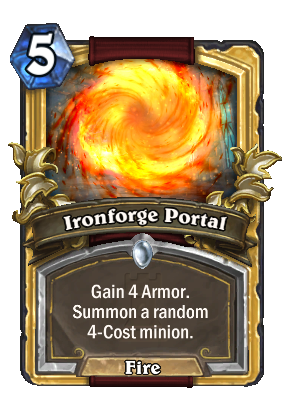 Come to beautiful Ironforge! Where irons are forged and the forges are iron!

Ironforge Portal is a common warrior spell card, from the One Night in Karazhan set.

Two copies of regular Ironforge Portal are obtained by defeating Free Medivh!, the final encounter in One Night in Karazhan's fourth and final wing, The Spire.

As a Wild format card, both regular and golden versions of Ironforge Portal can also be crafted for the following amounts:

This card fits well in a Warrior's control deck. Gaining four Armor increases the Hero's survivability, and the randomly generated minion can help control the board. However, against aggro decks, this card is often too slow, unless you get a very lucky random minion.

The below table lists all 4-cost collectible minions in Standard format, representing the range of possible minions summoned by Ironforge Portal.

Portals are a line of useful Mage utility spells that allow the caster to transport themselves and their party members to one of several fixed locations (including all friendly capital cities). In World of Warcraft, Alliance mages can open portals directly to Ironforge.

This spell opens a portal to the great city, with the hero apparently obtaining assistance from Ironforge's famed smiths in the form of some additional armor, as well as allowing a traveller to step through to aid the hero in battle.

This spell opens a portal to Ironforge, the dwarven capital. The portal appears to open into the fiery heart of the city, The Great Forge, where massive rivers of molten metal flow around the famed The Great Anvil, where the legendary Ashbringer was once forged by King Magni Bronzebeard himself.

Ironforge (or the City of Ironforge) is the capital city of the dwarves, proud members of the Alliance. It is the ancestral home of the Bronzebeard dwarves. The Council of Three Hammers rules the kingdom of Khaz Modan from the throne room within the city.

Carved into the stone heart of Khaz Modan, the mighty city of Ironforge is a testament to the dwarves’ strength and resilience. The city is perhaps the most intricate of the Alliance cities, boasting many small passageways, shops built into the rock walls, and cavernous rooms. The feel of the city is a bustling, rowdy, and somewhat industrial one. However, it is predominantly safe-feeling and cozy; fires roar in the hearths of the inns and shops, and much dwarven laughing and frivolity is to be heard. Also, unlike Stormwind and Darnassus, the city is actually a massive cavern carved into the earth by the dwarves; the ceiling and floor are both hard stone.

A marvel to the dwarves' skill at shaping rock and stone, Ironforge was constructed in the very heart of the mountains, an expansive underground city home to explorers, miners, and warriors. Massive doors of rock protect the city in times of war, and lava from the mountain itself is redirected and distributed for heat, energy and smithing purposes.