This article is using {{Card template}}.
See Help:Style guide/Card for how to edit this kind of article.
Edit this article
Ironbark Protector
205 • CS2_232
Regular 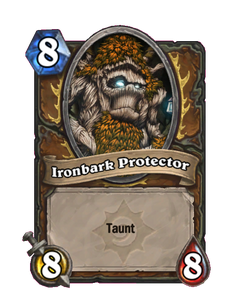 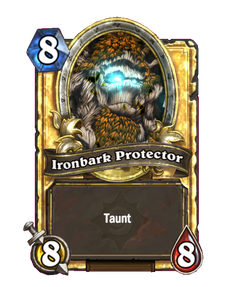 I dare you to attack Darnassus. 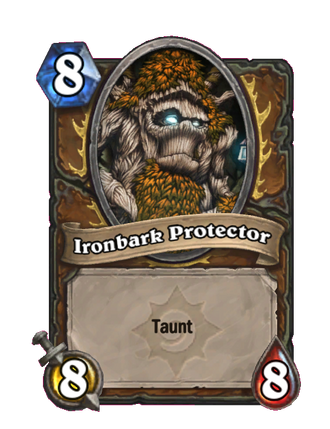 Ironbark Protector is a druid minion card, inducted into the Legacy set, formerly from the Basic set. 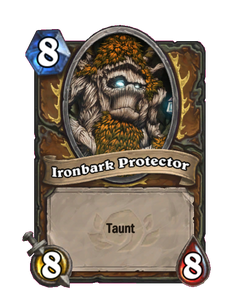 Regular and golden Ironbark Protector are uncraftable and cannot be crafted or disenchanted.

Costing 8 mana, Ironbark Protector is fairly pricey. However, its 8 health and Taunt ability means it is a good defender, and with 8 attack, it will likely kill whatever it is blocking.

Ironbark Protector is a great target for removal due to its bulk and cost to play. Be cautious when playing this minion and try to bait out removal on weaker minions to set up Ironbark Protector. Otherwise, you could spend an entire turn playing it for it to be the target of a cheap spell, such as

Polymorph, and lose all tempo you had as your opponent is able to deal with Ironbark and set up minions of their own.

Ironbark Protectors are a type of ancient protector, giant leafy defenders of Darnassus, the night elves and the druids. In World of Warcraft, the name "Ironbark Protector" refers to a group of corrupted ancients found in Dire Maul. However, given this minion's flavor text, this card may not specifically refer to those particular ancients, but to a general type of ancient protector who also share the epiphet "Ironbark".