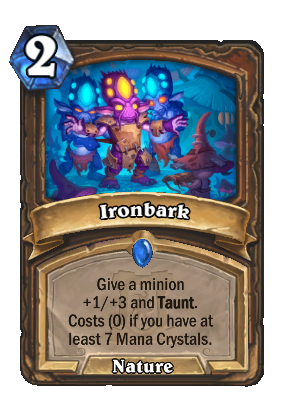 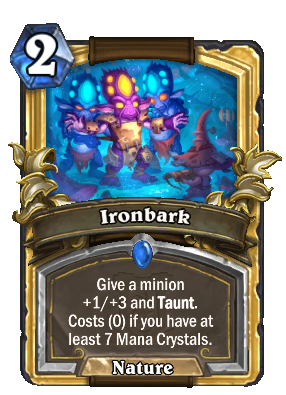 "The important thing, son, is to protect your spores! I have spoken!"

Ironbark is a rare druid spell card, from the Ashes of Outland set.

In a Ramp Druid deck, Ironbark can allow any minion you summon to immediately become relevant for no extra mana cost. While high-cost minions like Plagued Protodrake or Ysera, Unleashed may normally be considered too slow or greedy to be usable, the Taunt bonus from Ironbark can put those cards' large bodies to work. It can also help you stabilize against an aggro deck after spending your first few turns playing ramp cards, or force your opponent to attack into high-health and/or Deathrattle minions first in the late game. If your deck runs mass card draw like Ultimate Infestation, Ironbark can be easily dumped from your hand to clear up space whilst still having an impact.

Combo decks can also make use of the fact that Ironbark costs 0 in the late game. It is useful for strategies that rely on abilities triggering off of your spells, such as those of Gadgetzan Auctioneer, Kael'thas Sunstrider, and Exotic Mountseller.

Ironbark is a level 52 Restoration druid ability. Its description is a reference to the Ironwood trees.