Edit
watch 02:52
Roblox: DeepWoken - The Loop
Do you like this video?
Play Sound
Iron Sensei
Regular 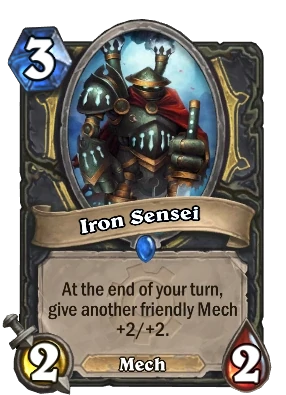 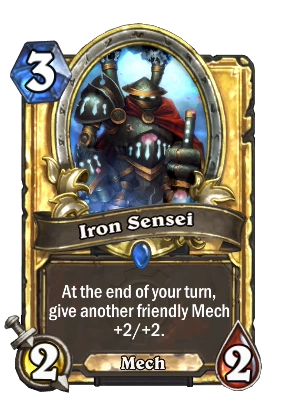 BG removed tavern minion
At the end of your turn, give another friendly Mech +2/+2.
Flavor text

Iron Sensei is a rare rogue minion card, from the Goblins vs Gnomes set. 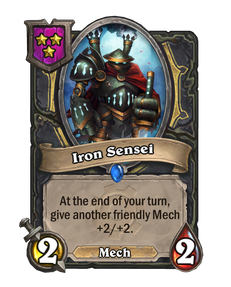 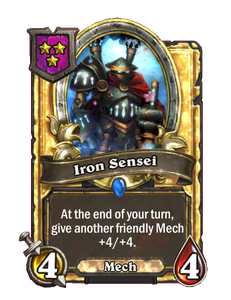 Iron Sensei can be obtained through Goblins vs Gnomes card packs, or through crafting.

At 3 mana for a 2/2, clearly this minion is not primarily of value for its base stats. Its ability though can provide a very good return on its mana cost, provided the minion is able to survive for a while, and provided it has a friendly Mech target available. The player can use Conceal or Master of Disguise to protect this minion, helping to keep it alive a little longer.

With 2 Iron Senseis, it is possible for them to buff each other. This makes a double Iron Sensei summon especially powerful. With no other Mechs on the board, for 6 mana you are guaranteed to end the turn with 2 x 4/4 Iron Senseis.

One of the best uses of this card is to play it on turn 3 or 2 (with The Coin) alongside a Target Dummy. Assuming the Target Dummy is the only other Mech on your side of the board, it is guaranteed to become a 2/4 with Taunt, and if your enemy cannot destroy either of them, can potentially grow even bigger every turn. Similarly, if you can get this card behind an Arcane Nullifier X-21, you can potentially get some really good leverage out of both cards.