This article is using {{Card template}}.
See Help:Style guide/Card for how to edit this kind of article.
Edit this article
Irebound Brute
64373 • SW_037
Regular 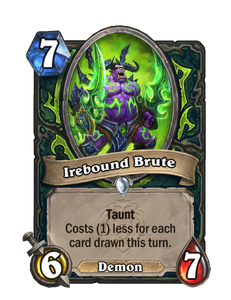 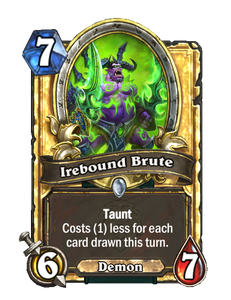 "You don't understand… ogres are an untapped market for vengeance and hatred!" 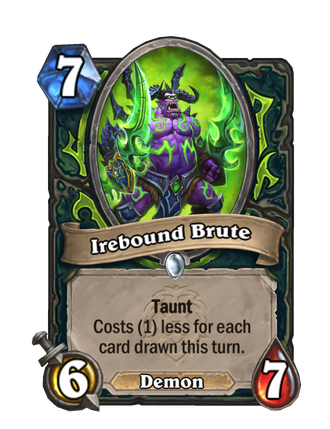 Irebound Brute is a common demon hunter minion card, from the United in Stormwind set.

On its own its essentially a 7 mana 6/7 with Taunt since the player will always draw a card at their start of turn.

To be able to reduce the card to lower, Decks must include card draw such as

Double Jump, or even Tradeable/

With the Questline, it can reduce the base cost of the card from the rewards or the permanent effects of Demonslayer Kurtus, allowing you to get to a lower cost card easier.

Since it is a demon, it can be easily copied with

Felosophy especially when its cost goes down to 0 meaning it will always be the lowest cost card.

On its own, it is a solid 6/7 Taunt when it is discounted to 0 mana which can be a huge threat early game and can be a decent Taunt later on in the game