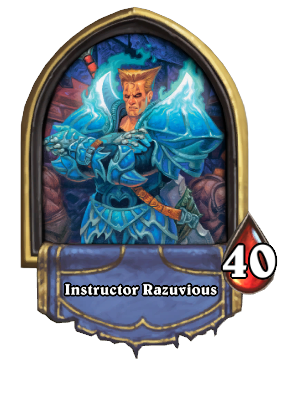 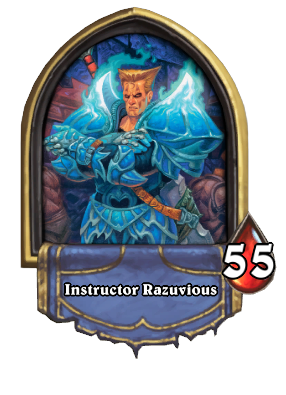 Someone must train the Death Knights brought to life in Naxxramas, and who better than Razuvious?

Instructor Razuvious is a boss found in the Curse of Naxxramas adventure. He is the first boss of the adventure's third wing, the Military Quarter. 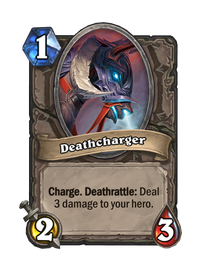 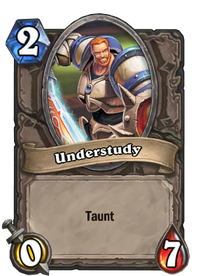 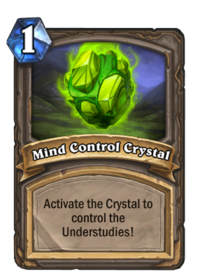 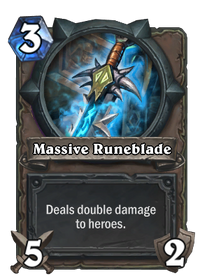 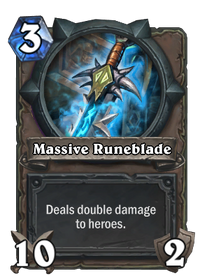 You start the game with Mind Control Crystal in hand.

The main reason why this boss is challenging is his Massive Runeblade, which he has 4 copies of in his deck. The Understudies are given to you to hold until the moment when you can fight back. Freeze effects can also be useful for preventing him from swinging with the Runeblade.

The suggested class for defeating Instructor Razuvious in heroic mode is priest. Your main goal is to steal the Massive Runeblade with Thoughtsteal or Mind Vision. To stabilize and survive until then you may run Divine Spirit and Inner Fire due to its synergy with the Understudies, and Acidic Swamp Ooze to destroy the Massive Runeblade, making it less effective. You also want to run any relatively cheap taunts, so you don't take 20 damage if Razuvious kills the Understudies. Note that Razuvious runs Brawl and The Black Knight so don't make plays that are weak against these cards. Always remember that Razuvious can deal 24 damage from hand with Massive Runeblade and Hero Power if you have no taunts on the field. If you are able to steal the Massive Runeblade, you probably win, along with extra damage from Inner Fired Understudies, Mind Blast and Holy Fire.

Kobold Stickyfinger allows you to swipe an equipped Massive Runeblade. Three hits will kill Razuvious, which can easily be achieved by using Hoard Pillager to re-equip your stolen Runeblade. 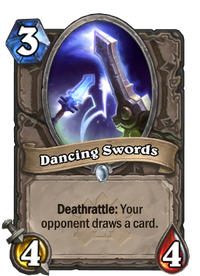 Kel'Thuzad
Please ignore the Mind Control stones next to Razuvious.

Instructor Razuvious
You should have stayed home!

Instructor Razuvious
Haha! I am just getting warmed up!

Instructor Razuvious
No! No! My students! Give them back!

Instructor Razuvious
Ugh... an honorable death.
Kel'Thuzad
Who will train my Death Knights now?! I can't do it myself, I'm SUPER busy.

Instructor Razuvious is the trainer of the Death Knights, the fiercest and most loyal of the Lich King’s servants. His strikes are sure and deadly, and it is rumored that only students under his tutelage can withstand even a single blow of his deadly runeblade.[1]

"Pay attention. This is Instructor Razuvious, Kel'Thuzad's appointed trainer of all death knights. It is said that his own technique is so potent, only a disciple of his could possibly withstand his might."
- Commander Eligor Dawnbringer

Instructor Razuvious was originally intended to be a collectible reward from the Curse of Naxxramas adventure. He was designed as a 5 Mana 8/8 minion with the effect "At the start of your turn, summon a 2/2 Understudy with Taunt for your opponent.".[2]

"Instructor Razuvious: After tutoring and subbing at many death knight academies, he finally got a full-time position in the Military Quarter."[3]