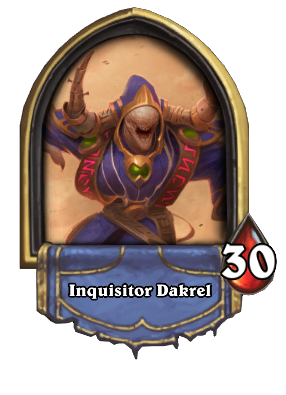 Aranna learns of the Rusted Legion when Dakrel tries to "recruit" her.

Inquisitor Dakrel is the first boss encounter in Chapter 1: A World in Ruin of Trial by Felfire Story. 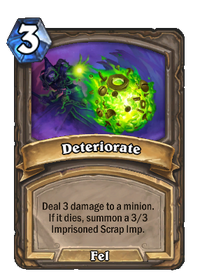 Inquisitor Dakrel is a generally easy encounter, as the first Boss of Trial by Felfire. Despite his Hero Power, there aren't any Deathrattle effects that particularly stand out. Maintaining board presence is key to victory.

Aranna's Hero Power draws the Discovered card of choice from the deck. Use it wisely to get the card you need in whatever the situation calls for. A general rule of thumb to follow here is that Aranna's decks revolve around a good amount of Beast synergy (eg. Scavenger's Ingenuity, Scrap Shot, etc.) and Secrets. (Blackjack Stunner, Shadowjeweler Hanar, etc.)

Illidan Stormage
But in the dust through that dark gate? Born of rust, a demon waits...

Inquisitor Dakrel
You will succumb to the rust... in time…

Inquisitor Dakrel
Just give in... a bit of scrap won't hurt you.
So? Are you coming with me?
Would a mechanical arm not suit you? Telescopic eyes?

Inquisitor Dakrel
Build something new...
Rust to rust...
These parts will serve the Rusted One.
This one has joined our cause…

Aranna Starseeker
A Legion? What do you mean?
Inquisitor Dakrel
The Rusted One beckons to you, Night Elf… Come…

Some casualties are... to be expected.

From scrap and shadow... a protector.

Fall, for the Legion!

Impressive! I wonder - could we mechanize that?

Wait! Where are you going?

Inquisitor Dakrel is original to Hearthstone.

Inquisitors are a race of demons in service of the Burning Legion. They're horrific fel casters who see through their floating eyes and specialize in dark pacts. When killed, their body becomes one of their eyes.