This article is using {{Card template}}.
See Help:Style guide/Card for how to edit this kind of article.
Edit this article
Inner Fire
376 • CS1_129
Regular 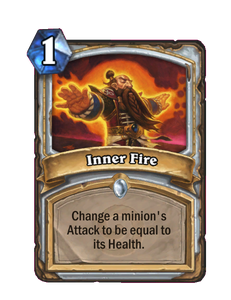 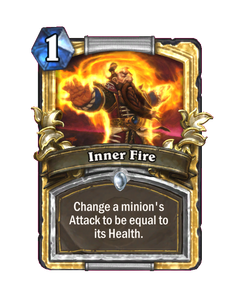 Dimensions: Full • 330 x 410px
Change a minion's Attack to be equal to its Health.
Flavor text

Good idea: Buffing your minions. Bad idea: Starting a conversation in the Barrens. 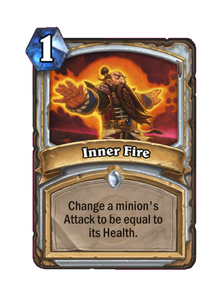 Inner Fire is a common priest spell card, inducted into the Legacy set, formerly from the Classic set. 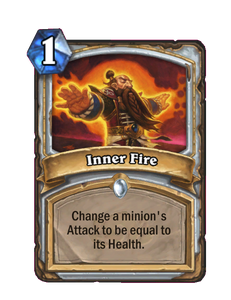 This card works very well in combination with Divine Spirit and other Health-increasing effects like Power Word: Shield. Priests can use these effects to increase a minion's Health as much as possible before using Inner Fire to translate that improvement into Attack. Common minions with a lot of hit-points include Shieldbearer, Oasis Snapjaw, Mogu'shan Warden and Gurubashi Berserker.

Inner Fire is a key part of the Divine Spirit combo, allowing the massive increase in a minion's Health to be translated into Attack. Lightspawn effectively has a constant Inner Fire effect, allowing the priest to execute such a combo without playing this card.

Inner Fire was a priest ability in World of Warcraft that increased the priest's armor and spell power. Originally featuring charges that were depleted each time the priest was attacked, the spell was later turned into a non-depletable long-duration buff, before eventually being changed to last until cancelled. Since its beginnings the buff had been an automatic and mandatory buff, expected to be maintained at all times, and with its latter incarnation requiring almost zero player interaction, it was a perfect candidate for removal in Warlords of Draenor's 'ability pruning'.