This article is using {{Card template}}.
See Help:Style guide/Card for how to edit this kind of article.
Edit this article
Inkmaster Solia
40701 • CFM_687
Regular 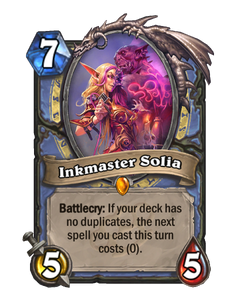 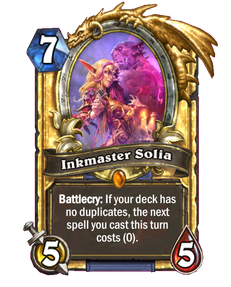 Dimensions: Full • 330 x 410px
Elite
Battlecry: If your deck has no duplicates, the next spell you cast this turn costs (0).
Flavor text

Solia marks the Kabal with intricate tattoos that grant immense power. Also it makes it harder for other gangs to recruit from their numbers. BACK OFF, GOONS. 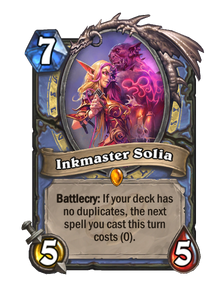 Inkmaster Solia is a legendary mage minion card, from the Mean Streets of Gadgetzan set.

Because this minion costs 7 mana, it can be played on curve after Reno Jackson, which also requires no duplicates (in the player's deck) to trigger its effect. If you have already played Kazakus and have chosen for a powerful 10 mana spell, playing it together with Inkmaster on turn 7 can be completely devastating for your opponent. Other valuable combos are Flamestrike, Firelands Portal, Blizzard, or one of Arch-Thief Rafaam's Artifacts. The mana reduction of her battlecry also ignores the cost increasing effects of Loatheb, allowing you to effectively bypass his otherwise ruinous effect on a board clear spell.

Inkmaster Solia is unique to Hearthstone. She appears to be the one responsible for creating the distinctive magical tattoos worn by members of the Kabal.

"Once you come to the inevitable conclusion that the only path toward true mastery lies with US—here, have some more ice-cold Kaza-kola—you’ll need to dress the part. I think red or purple robes can be quite fetching. Some of us pay a visit to Inkmaster Solia to receive one of her glorious glowing crimson tattoos. A tattoo from her not only marks your dedication to the Kabal, but can serve as a handy nightlight or massive reservoir of power in a pinch."[1]

The Gadgetzan Gazette Volume 32 #10 page 2 features an advertisement for "Inkmaster Solia's Tattoos", located on 1818 Gadgetzan Way. The "Help Wanted" section also features an advertisement which reads: "Skin Game — Solia's is looking for the arcane AND artistically inclined for tattooing apprenticeships. Put your arts work and make an everlasting impression on our clients. 2+ years summoning and binding experience needed."