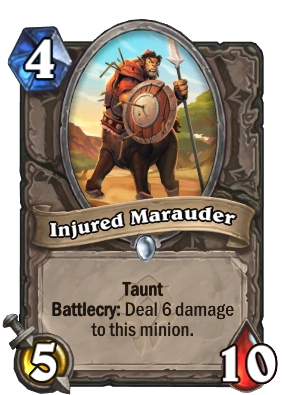 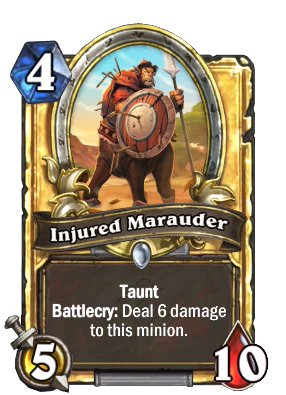 He’ll keep going despite the neighsayers.

Injured Marauder is a common neutral minion card, from the Forged in the Barrens set.

Injured Marauder can be obtained through Forged in the Barrens card packs, through crafting, or as an Arena reward.

Injured Marauder has incredible base stats for its Cost, but becomes significantly less impressive when played from hand (effectively becoming a 5/4 Taunt). It's best to summon this through another card effect if you can, such as with Commencement. Alternatively, Priest can heal it up back to full size and some Warrior cards can make use of the fact that Injured Marauder minion is effectively damaged by default.

Even though options are limited in Standard, Wild players have many more tools to ignore this card's drawback. There are a number of decks in that format which like summoning big minions early; while Injured Marauder isn't as efficient as the minions those decks typically use, it has the benefit that it's not a dead card if drawn too early. Druid can summon this extremely efficiently with Oaken Summons and/or resurrect it with Hadronox, Warrior has Gather Your Party and Dimensional Ripper, and Priest can drop this from hand and then summon full-size copies using their myriad of resurrection cards.