This article is using {{Card template}}.
See Help:Style guide/Card for how to edit this kind of article.
Edit this article
Injured Blademaster
1109 • CS2_181
Regular 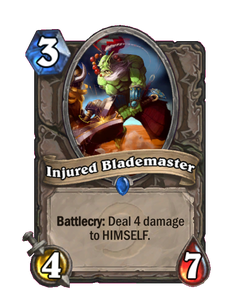 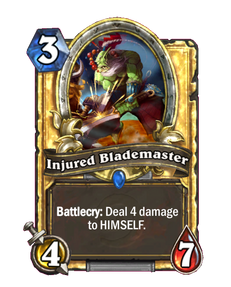 He claims it is an old war wound, but we think he just cut himself shaving. 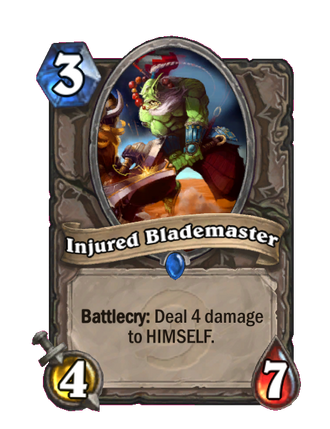 Injured Blademaster is a rare neutral minion card, inducted into the Legacy set, formerly from the Classic set. 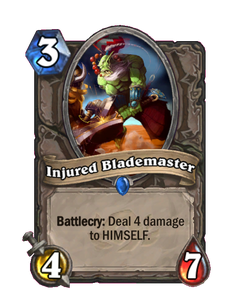 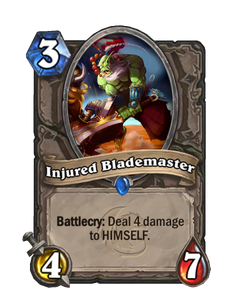 Two copies of regular Injured Blademaster are obtained for raising sum of all your class levels to 30.

Two copies of golden Injured Blademaster (Core) are obtained for winning 1000 games across all classes.

Injured Blademaster (Core) is uncraftable and cannot be crafted or disenchanted.

Injured Blademaster's Battlecry immediately deals 4 damage to himself, leaving the controlling player with a wounded 4/3, and not a 4/7. However, his maximum Health capacity of 7 will remain.

Circle of Healing results in a 4/7 minion for only 3 mana.

Divine Spirit can also be used upon him to great effect once his Health has been restored. He also works well in a warrior deck, combining him with

Battle Rage. Also, shamans can make a good use out of it with

Ancestral Healing, making it a 4/7 Taunt for 3 mana and 2 cards.

His self-damage will trigger effects such as

Acidmaw is on the board, the Injured Blademaster will be immediately destroyed upon being played.

Resurrect), his Battlecry will not take effect, leaving you with a full Health 4/7.

Because of Injured Blademaster's self-harming Battlecry,

Backstab cannot be used on the minion unless he is healed, or his maximum Health reduced appropriately, making it harder for rogues to remove him. On the other hand, the same self-harm makes him vulnerable to

Note that playing this card while you control

Brann Bronzebeard will result in the Injured Blademaster killing itself.

The blademasters, also known as blade masters, and are known for masterfully wielding swords or other weapons on the field of battle. They were created when the orcs were first corrupted, to serve the legion's purposes, but, since many orcs have freed themselves, there are now blademasters found in the Horde and the Burning Legion.

Though their numbers are few, the seasoned blademasters represent an elite fighting force within the Horde. These skilled swordsmen were once part of the ill-fated Burning Blade clan which consumed itself in the throes of demonic corruption. With their clan scattered and broken, the proud blademasters swore a grim oath to free themselves and their brethren from demonic control once and for all. Under

The few blademasters who still exist are mostly loyal to the Horde. They have sworn oaths to free their people from demonic corruption, and they usually do this through example: if they can be as formidable as they are without the Legion's help, other orcs can as well. An example of such a "redeemed" blademaster who is not a Horde member is Lantresor of the Blade, chief of the Boulderfist in Nagrand.