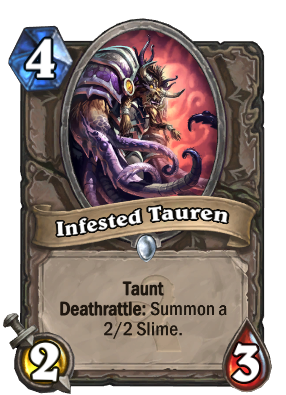 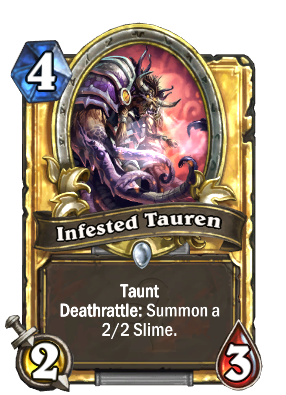 The Overmind and the Old Gods are surprisingly similar.

Infested Tauren is a common neutral minion card, from the Whispers of the Old Gods set.

Infested Tauren can be obtained through Whispers of the Old Gods card packs, or through crafting. 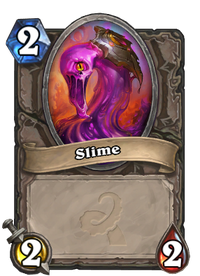 Due to its low stats, the Infested Tauren should be played for synergy with other cards; it curves well in a deck that runs N'Zoth, the Corruptor, used as a decent mid-game play. When brought back onto the board via N'Zoth, the Taunt immediately helps protect other summoned minions, while the Deathrattle acts as insurance in the case of a board clear.

Summon
For The Swarm.

This tauren has clearly been infested by the influence of the Old Gods, granting it some slimy new powers. Based on its stats and Taunt, it appears to be a corrupted version of Tauren Warrior.