This article is using {{Card template}}.
See Help:Style guide/Card for how to edit this kind of article.
Edit this article
Inara Stormcrash
61230 • DMF_708
Regular 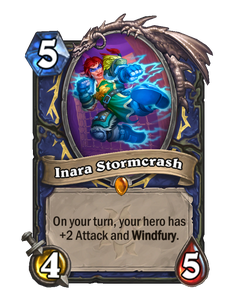 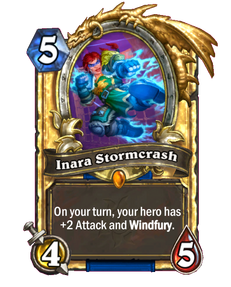 Dimensions: Full • 330 x 410px
Elite
On your turn, your hero has +2 Attack and Windfury.
Flavor text

A fan favorite, Inara is always met with thunderous applause. 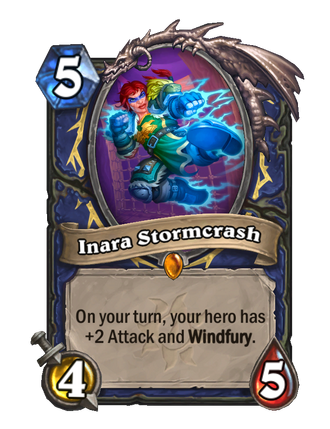 Inara Stormcrash is a legendary shaman minion card, from the Madness at the Darkmoon Faire set.

Inara is a strong curve-topper in aggressive Shaman decks. She's similar to

Stormstrike. Inara has several benefits that Doomhammer doesn't, though: she leaves your weapon slot open, won't Overload your mana next turn, and comes with a decent 4/5 body. In exchange, she's much more easily removed by your opponent (limiting her long-term usage), can't trigger Overload synergies, and can't be tutored by

In general, however, most decks that run two Doomhammers will also want Inara Stormcrash, and vice-versa. Since she doesn't compete for your weapon slot, she isn't a dead card if you already have a Doomhammer equipped and you'll still get some use out of her passive effect.

Inara is unique to Hearthstone. She is a Wildhammer dwarf.