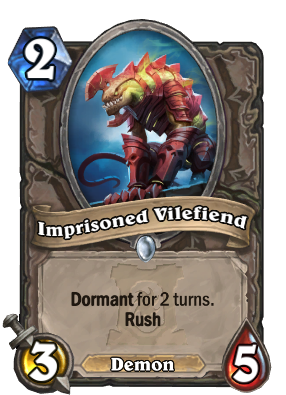 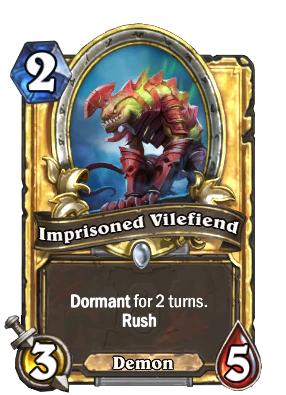 If you do the time, you gotta make up the time.

Imprisoned Vilefiend is a common neutral minion card, from the Ashes of Outland set.

Imprisoned Vilefiend can be obtained through Ashes of Outland card packs, through crafting, or as an Arena reward.

A high-statted Rush minion for two mana. Its high Health gives it a good chance to survive for at least two trades in the early game, the Rush means it has immediate board impact and, unlike some of the other stat-oriented Imprisoned cards, it doesn't fall off quite as quickly in the later stages of the game. Like all Imprisoned cards, it can be played around somewhat by the opponent, though this is mitigated in this case by its decent body which still represents a threat on the board, even without the Rush. A good pick to fill out a midrange or Control curve.

Vilefiends (or fiends) are a type of demon found on Argus. They are infused with acidic blood through a terrifying ritual.