This article is using {{Card template}}.
See Help:Style guide/Card for how to edit this kind of article.
Edit this article
Imprisoned Homunculus
56624 • BT_258
Regular 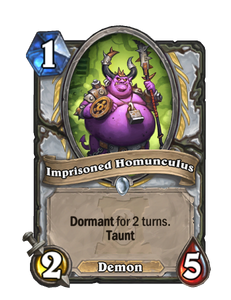 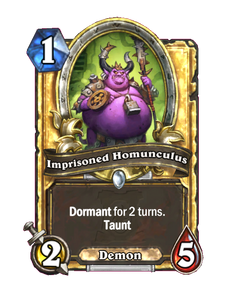 He got a time out for excessive vulgarity. 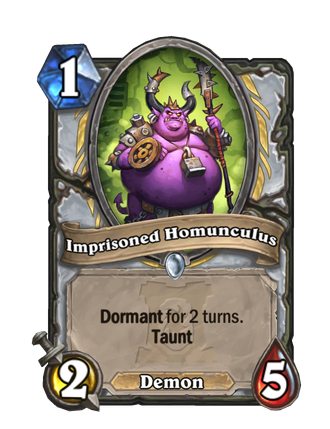 Imprisoned Homunculus is a common priest minion card, from the Ashes of Outland set.

If played on curve, Imprisoned Homunculus is a free 2/5 on turn 3. With its high health, it can block many low attack minions. It can also be buffed through priest spells like

Power Infusion to give it more health and more face protection.

A homunculus, plural homunculi, is a type of undead construct so lifelike so as to be undetectable, even by undead-hunting experts such as

Lilian Voss. Homunculi speak in coherent thoughts, and their skin is well-preserved. However, when sliced open a green liquid pours out of their bodies. The dreadlords of the Burning Legion started to use them during the Third invasion of the Burning Legion to infiltrate their enemies, in reaction to the demon hunters' ability to detect demons in disguise. Despite this recent use, they are not a recent invention: homunculi have been known to Azeroth since at least as far back as the First War. Kirin Tor doctrine frowns upon making homunculi, but some such as

Khadgar understand the principles involved in creating them.

Homunculi were first introduced in World of Warcraft in the Burning Crusade expansion as a type of small, imp-like creatures found roaming the haunted tower of Karazhan. However, the more rotund depictions of these homunculi are exclusive to Hearthstone, starting with