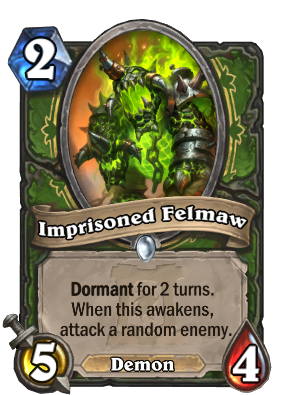 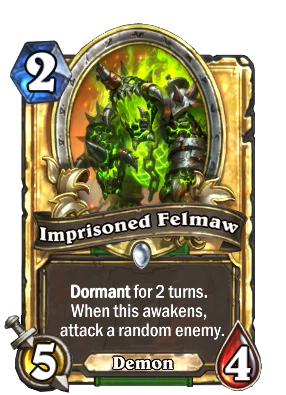 Dormant for 2 turns. When this awakens, attack a random enemy.
Flavor text

It doesn't care who woke it up, someone's getting bitten.

Imprisoned Felmaw is a common hunter minion card, from the Ashes of Outland set.

Imprisoned Felmaw can be obtained through Ashes of Outland card packs, through crafting, or as an Arena reward.

A solid card for Face Hunter and faster Midrange Hunters. Try to keep your opponent's board clear so Felmaw can deal 5 damage to the opponent's hero and leave a 5/4 in play.

If you're against a Felmaw, you can save minions to play on the turn before it awakens, giving it a chance to hit them instead of your face. This is especially great value if you play a minion with 4 or more attack, essentially letting it "Rush" into the 5/4.

Imprisoned Felmaw is a fel beast.

Fel beasts (also known as Fel Core Hounds) are rare creatures similar to core hounds, but made of green fel energies instead of lava.

The ones in Shadowmoon Valley were spawned from the Hand of Gul'dan, but they are not unique to Outland since Baelmon the Hound-Master summons them from a world on the other side of Death's Door.