This article is using {{Card template}}.
See Help:Style guide/Card for how to edit this kind of article.
Edit this article
Imprisoned Antaen
56649 • BT_934
Regular 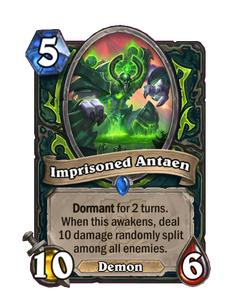 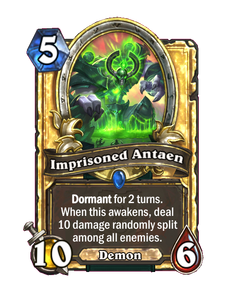 Can I get a pair of size XXXXXL manacles? 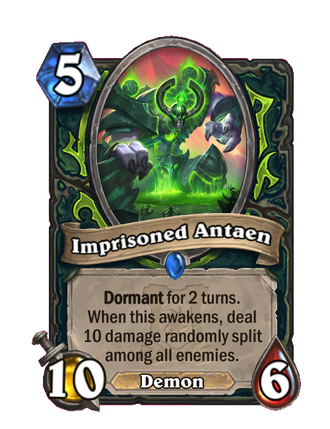 Imprisoned Antaen is a rare demon hunter minion card, from the Ashes of Outland set.

Imprisoned Antaen is a very powerful finisher in aggressive decks. Although the effect is delayed, once it awakens the amount of damage it deals makes up for lost tempo by clearing out boards of weaker minions. Because it can also damage the enemy hero, it forces the opponent to put minions on board to absorb some of the damage if they're at risk of dying. On top of that, as a 10/6, it threatens even more damage on board and at 6 Health it can survive most low-cost removal spells, save for hard removal like

Another way to use it is in Midrange or Control decks. When it wakes up, it will usually weaken your opponent's board considerably, plus the 10/6 statline would present a huge threat.

Antaen are massive demons found on Argus. They are so large that

Prophet Velen mistook the top of one's head for a siege weapon.