Difference between revisions of "Imp-losion" 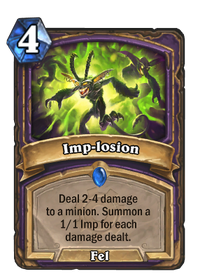 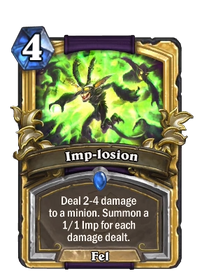 The shrapnel is waaaaay worse than the explosion.

Imp-losion is a rare warlock spell card, from the Goblins vs Gnomes set. It deals damage and summons 1/1 Imps.

Imp-losion can be obtained through Goblins vs Gnomes card packs, or through crafting. 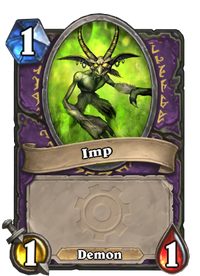 At an average of 3 damage + 3 Imps, this card is barely mana-efficient, so Spell Damage is highly recommended.

Be aware that the summoned Imps are very vulnerable to AoE attacks such as Holy Nova, Consecration and Wild Pyromancer.

This card works very well with Knife Juggler, for 2-4 extra knives. This essentially doubles the damage output of this spell, although the targets of the knives are not controllable. In this case the sequence of events will be: the spell deals damage; the Imps are summoned, one at a time, each followed by any events triggered from its summoning; then finally any deaths are resolved. Note that the Imps will be summoned before any deaths from the spell's damage have resolved, meaning that Deathrattle summons such as Harvest Golem's Damaged Golem will not appear on the board until after the Imps' summoning and related effects like Knife Juggler have resolved.

This spell will generate golden Imps if the target character is golden, even if the Imp-losion is not. For example, using a regular Imp-losion on a golden Sheep will produce golden Imps. This is a known bug.[5] 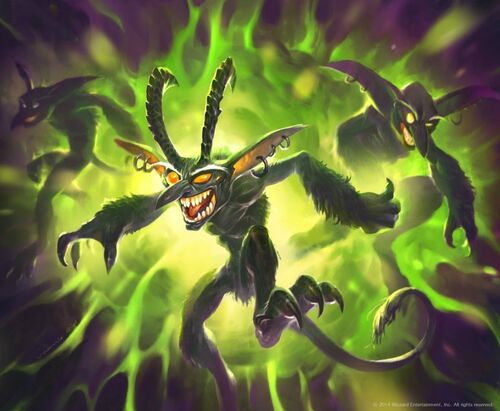