"You are out of demons! At least there are always imps..." - Worthless Imp

Imps are Demon minions, mostly belonging to the warlock class. There are several types of imp, and imps are by far the most common type of demon in Hearthstone.

Collectible imps have a variety of abilities and stats, and are each uniquely named. Most uncollectible imps are 1/1 minions with no special abilities, and most have the same name - Imp. 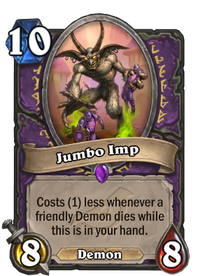 There are 4 achievements related to Imps.

Imps are like roaches. If you see one, there are definitely more nearby, and they’re probably doing things like letting the air out of your tires, changing your computer’s background to something embarrassing, or ’plosioning. It’s even worse when they’re in a gang . . . or SUPER GREAT if they’re on your side.[1]