This article is using {{Card template}}.
See Help:Style guide/Card for how to edit this kind of article.
Edit this article
Immortal Prelate
50022 • TRL_306
Regular 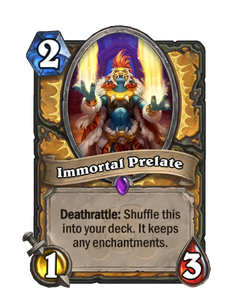 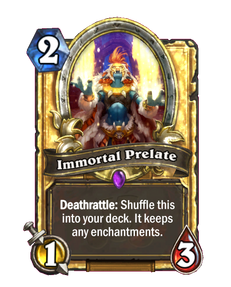 Dimensions: Full • 330 x 410px
Deathrattle: Shuffle this into your deck. It keeps any enchantments.
Flavor text

She protec.
She attac.
But most importantly,
she come bac. 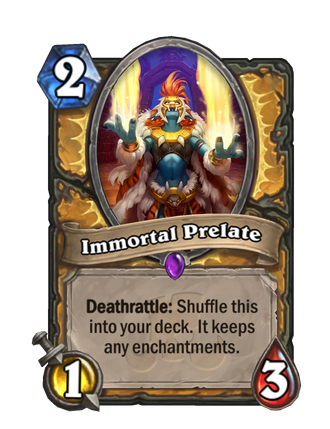 Immortal Prelate is an epic paladin minion card, from the Rastakhan's Rumble set.

Immortal Prelate is a power curve card. It has a great late game potential, but can be a serious threat even in early stages. Its Deathrattle can delay your fatigue as long as your opponent does not have any hard removal (Polymorph, Silences, "Return to Hand" and

Since Immortal Prelate will always return to your deck, force draws and Recruit are the best options to use along it. The more the better, and, as long as the game keeps going, she will become stronger and harder to dispose. Along with Recruit, you can use

Duel! for a force summon. For force draws, consider using

You can create several copies of this card by using

Desperate Stand. As mentioned before, it keeps the summoning Deathrattle, adding more Prelates as long as you have the buffed one. A similar effect occurs when combined with

Prelate is a title used for paladin-like warriors among the Zandalari trolls, with the prelates of the devilsaur loa Rezan being the highest order of holy warriors to serve any loa in Zandalari society. Much like overall the association between paladins and Shirvallah, prelates sworn to Shirvallah are unique to Hearthstone.