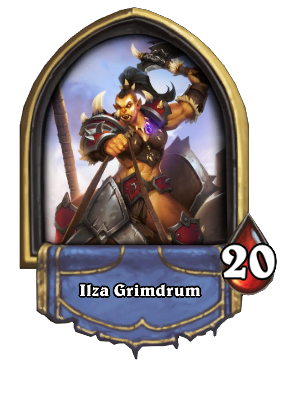 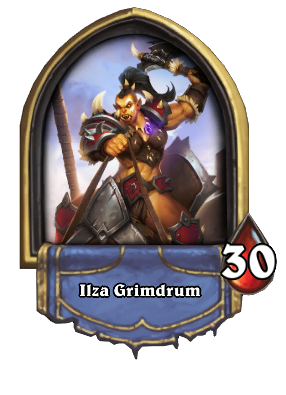 Ilza is an arena champion known as 'The Cruel Dueler.'

Ilza Grimdrum is a boss that can be encountered initially in Chapter 4 of Tombs of Terror. After completing Chapter 4, this boss encounter will be available in any completed chapter.

These decks correspond only to level 4. If this boss is encountered on level 3, his deck will be missing 5 random cards.

Ilza Grimdrum
Are you trying to pick a fight? 'Cause I am.
Are you a fighting fish? Or a flying fish? (vs. Sir Finley)

Ilza Grimdrum
Go ahead, rile me up.

Ilza Grimdrum
Fists up!
Get 'em!
Round one!

Ilza Grimdrum
I love fighting. It's just so relaxing!
If you're not mad about something, you're not thinking enough.
Used to be an arena champion, but I wanted to travel more.

Crush you with my bare hands!

Ilza Grimdrum
Guess I'll have to find another brawl...

Ilza Grimdrum is unique to Hearthstone.