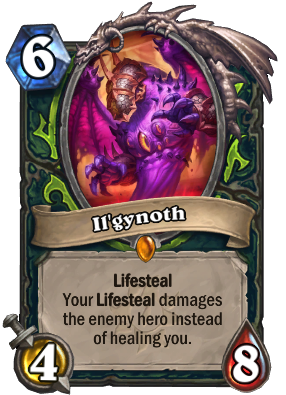 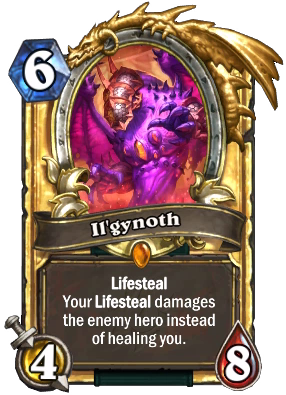 Elite
Lifesteal
Your Lifesteal damages the enemy hero instead of healing you.
Flavor text

Well, that just sounds like damage with extra steps.

Il'gynoth is a legendary demon hunter minion card, from the Madness at the Darkmoon Faire set.

Il'gynoth can be obtained by:

There are many Lifesteal options for Demon Hunters, be it from the Aldrachi Warblades + attack boosts like Inner Demon and Soulshard Lapidary combos or from general spells like Soul Cleave and Eye Beam. Control Demon Hunters can use this as a way to close out the late game with all of their leftover, presumably worthless Lifesteal cards, and Aggro decks can bypass Taunt and finish off their opponent without having to waste resources dealing with the minions.

You can also combine Il'gynoth with Mo'arg Artificers for extreme burst damage. Artificers can be duplicated by Felosophy for even more doubling, allowing you to kill the opponent from full health with spells.

There are 3 achievements related to Il'gynoth.

Il'gynoth's first appearance was Il'gynoth, the Heart of Corruption, the second boss of the Emerald Nightmare, fought within a twisted nightmare version of Un'Goro Crater.

Lodged in the hollows of a now-decrepit world tree, Il'gynoth is a manifestation of the horrors that lie at the heart of the Nightmare. It is a mass of corruption - a thing that should not be. Its tendrils seep through the ground, emerging in countless horrifying eyestalks and limbs.

Il'gynoth made a second appearance as Il'gynoth, Corruption Reborn, a boss in World of Warcraft's Ny'alotha, the Waking City raid.

Following its defeat in the Emerald Nightmare, Il'gynoth retreated into the depths of Ny'alotha to regain its strength. Now it has fused with the city's architecture and spreads across the Black Empire like a creeping infestation. As Il'gynoth's corrupting flesh grows ever larger, so does its power.