This article is using {{Card template}}.
See Help:Style guide/Card for how to edit this kind of article.
Edit this article
Ignite
64434 • SW_110
Regular 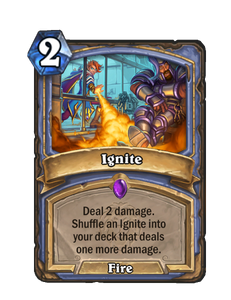 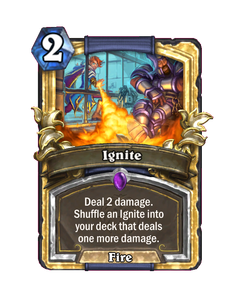 "So there I was in the Deadmines, I had VanCleef by the throat, and I was just about to let him have it when... <sniff> What's that smell?"

Ignite is an epic mage spell card, from the United in Stormwind set.

Ignite can be obtained by:

At its base, Ignite does below average damage for its mana cost. However, it becomes much stronger over time the more it's being used in which it become much stronger than Fireball and Pyroblast at 2 mana.

It also eliminates the ability to get into fatigue as it gets shuffled back into the deck allowing you to draw it on the next turn. However Tickatus or Gnomeferatu can break the unlimited Ignite value.

Ignite is best used in a one-turn kill based deck with cards such as Sorcerer's Apprentice and Sanctum Chandler as Sanctum Chandler effect will trigger after Ignite is shuffled into the deck. With double Sorcerer's Apprentice, Ignite is free of cost and can be cast as many time as it wants within the allocated time for that turn which results in instant death. Should Ignite not be drawn, cards like Hot Streak, First Flame can easily get to Ignites

Ignite can be used in a spell-based deck due to its cheap mana cost and can be empowered by Sorcerer's Gambit questline. It can also benefit from Hot Streak setting its cost to 0. Because of the unlimited generation, it can be used to activate Grand Magus Antonidus conditional effect.