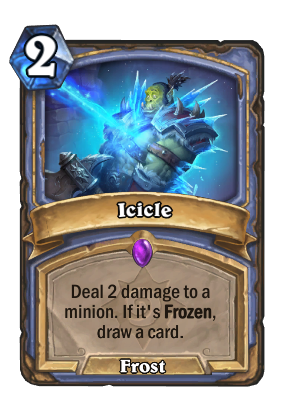 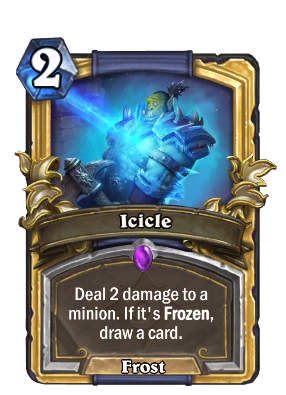 Deal 2 damage to a minion. If it's Frozen, draw a card.
Flavor text

This may appear weak at frost glance, but it's actually a very ice spell.

Icicle is an epic mage spell card, inducted into the Legacy set, formerly from the Classic set.

Icicle can be obtained through crafting only.

A fairly weak source of removal. If the target is frozen, Icicle can at least pay for itself by drawing another card, but that usually requires spending a card for that effect. Icicle pairs best with Water Elemental as a reoccurring source of freezing.

Icicle's name is similar to Mastery: Icicles, the passive Mastery effect for Frost mages in World of Warcraft. Damaging an enemy with Frostbolt stores a portion of the damage as an icicle, and casting Ice Lance will automatically launch all stored icicles (up to a maximum of 5) at the target.