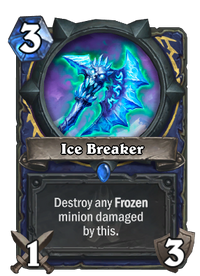 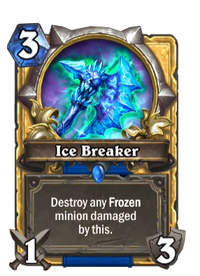 Destroy any Frozen minion damaged by this.

A great way to end a conversation.

Ice Breaker is a rare shaman weapon card, from the Knights of the Frozen Throne set.

Ice Breaker can be obtained through Knights of the Frozen Throne card packs, or through crafting.

Ice Breaker is a understatted weapon with a potentially strong ability. In a deck with fairly consistent access to Freeze effects, it has the potential to remove three minions for three mana, which is excellent value. Although without the effect being satisfied, it is a Light's Justice for two more mana and one less durability, which is not ideal in any situation. While this card is great at removing strong minions if built right, it's recommended to add heals to your deck to offset the damage taken.

In Arena, Ice Breaker is a poor pick, as it will almost always serve as a very expensive 1 Attack weapon, as it's not possible to consistently draft Freeze effects.