This article is using {{Card template}}.
See Help:Style guide/Card for how to edit this kind of article.
Edit this article
Ice Block
192 • EX1_295
Regular 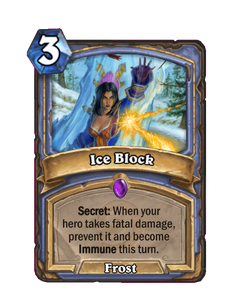 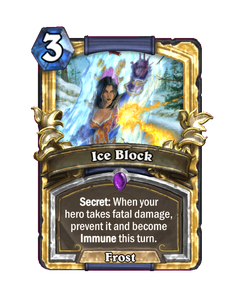 Ice is nice, and will suffice! 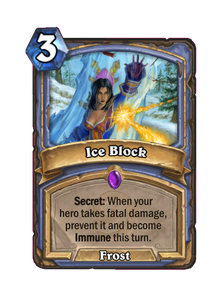 Ice Block is an epic mage spell card, inducted into the Legacy set, formerly from the Classic and Hall of Fame sets. 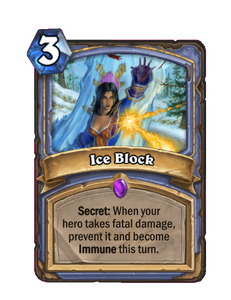 Can be very effective as an endgame surprise and can be a clutch game saver, giving you one more guaranteed turn. A key card for Freeze Mage.

Note that Ice Block will be triggered in response to any attack (during the opponent's turn) that would deal fatal damage to the user - the user's Health will then be frozen at its current value. For this reason it is generally desirable for opponents to attempt to get the user's Health as low as possible before triggering the Ice Block. In this way, when the user loses Immune at the start of the next turn, they will have a minimum of Health remaining.

As with all Secrets, it should be noted that Ice Block will not activate on the controlling player's turn, meaning that sources of damage such as Fatigue, Mad Bomber or a paladin's Eye for an Eye on the mage's turn are capable of destroying the user despite the presence of an inactivated Ice Block.

Since this Secret will only trigger once your Health gets below 1, playing this card with the Ethereal Arcanist is a fairly strong mid-game combo, giving the minion continual +2/+2 boosts. Medivh's Valet can also consistently deal 3 damage, making both Medivh's Valet and Ice Block core cards for Secret Mage decks.

Like all secrets, Ice Block is vulnerable to Eater of Secrets, Flares, etc. To circumvent, your enemy has to do the work. Explosive Trap or other similar secrets that do reactionary Face damage help.

Ice Block is a mage spell from World of Warcraft. It encases the mage in unbreakable ice for 10 seconds, but prevents the mage from moving or acting for the duration. Unbreakable by all but the most powerful spells, the ice block renders the mage completely immune to all damage, and other hostile effects. It is commonly used in PvP to frustrate and delay opponents, as well as to give the mage time for their cooldowns to recover, at which point the mage may try to escape, using spells like Frost Nova and Blink to make their getaway. It can also be useful to buy time until a healer can get to you, or can be used immediately after activating a heal over time effect to allow the mage to 'stealth-heal', invulnerable from further attack. Similar to Hearthstone's version, mages can also use it specifically to avoid damage from a particularly powerful attack.

Commentary: This Mage secret is a powerful card, and has been the centerpiece of Standard decks for years. It’s time to make more room for new Mage decks in Standard.