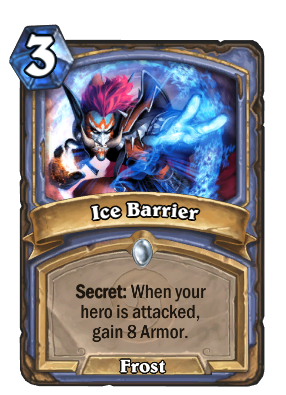 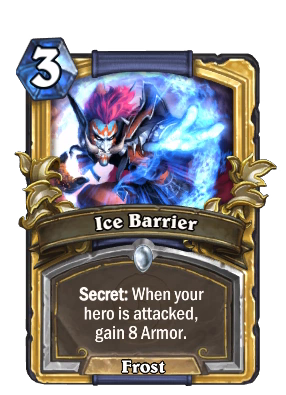 Secret: When your hero is attacked, gain 8 Armor.
Flavor text

This is Rank 1. Rank 2 is Chocolate Milk Barrier.

Ice Barrier is a common mage spell card, inducted into the Legacy set, formerly from the Classic set. 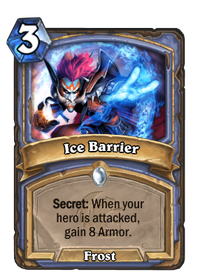 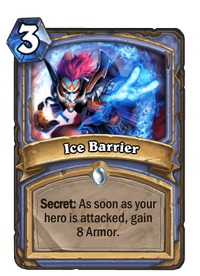 Ice Barrier can be obtained through Classic card packs, or through crafting.

Ice Barrier (Core) is uncraftable and cannot be crafted or disenchanted.

Ice Barrier is a useful card if you want to stall out the game to play strong minions later on in a control-type mage deck. It is a staple card in Freeze Mage.

Mad Scientist is a useful Wild format minion in a deck with Ice Barrier and other Secrets so that you can more reliably get Ice Barrier into play.

Ice Barrier is a mage spell which creates a protective barrier around the mage, absorbing damage and preventing pushback from damaging attacks while it holds. It was a staple defensive spell for Frost mages before being made into a class-wide talent with Mists of Pandaria. Unlike Hearthstone's version, the spell is not triggered by an attack, but can be cast on cooldown, and is generally kept active as much of the time as possible when in combat.