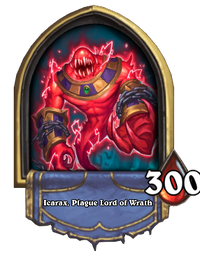 The fourth plague roots within the heart: Wrath tears friend and foe apart.

Icarax, Plague Lord of Wrath is the final boss in Chapter 4 of Tombs of Terror.

Icarax is definitely the easiest final boss of Tombs of Terror adventure since all of his decks, hero powers and ways of board spam are much weaker than of other Plague Lords. This makes it much easier for the player to trade, take the board and deprive the opponent of resources in this final battle.

Despite Icarax almost does not have an ability to significantly strengthen his damaged minions, leaving them on the table is highly undesirable regardless of the player's available resources. Otherwise, almost immortal Rush minions (phase 1) or large ones with permanent high health (phase 3) will not allow to regain the board advantage, and the available spells or minions with AoE effect may not be enough to contain enemy minions.

Since all three Icarax's hero powers, as well as many cards in his decks, require a certain interaction with minions, the player may have a favorable situations when Icarax's resources are exhaust or he has unplayable cards in hand (such as Devastate, Battle Rage, Execute, Plague of Wrath and Sudden Genesis).

Keep in mind that throughout all three phases, this boss uses the same AoE spells – Warpath, Brawl and Plague of Wrath. The problem is that it will be difficult to beat everything at once. Warpath is good against small minions, and the other two are good against big threats. The player can not spend too many resources, but at the same time can not play too slowly, otherwise Icarax will quite easily overwhelm the player. Overall, it is advisable to play with 3-4 minions on the board and prepare a new ones in hand.

The most useful passives and treasures in this encounter:

1) First Aid Kit. Healing on each turn significantly reduces the usability of boss execute effects. In addition, it can allow to outlast more trades combined with a small twist buff of Chapter 4.

2) Rocket Backpacks. In addition of immediate protection against damage to the hero it allows to outrun Icarax in the tempo (this is especially important in phases 1 and 3), it also makes it easier to lure Icarax's removals and save the stronger minions.

3) Band of Bees. If the player's deck or hero power contain or can generate a lot of cheap minions, this passive will provide an easy trades throughout the game. The minions with at least 2 HP are preferred since it will prevent them from dying instantly from Warpath, Ravaging Ghoul, or Blood Razor.

4) Disks of Legend. As long as the player has at least 2 threats on board that Icarax can kill with Brawl or Plague of Wrath, he will tend to use it. It it a lot easier to bait out his strong removals with this treasure.

5) Truesilver Lance + Bubble Blower; Addarah. This combo of weapon and hero power provides an ability to simultaneously generate resources and restore health, which is useful throughout the battle, regardless of its duration. Addarah will play best in phases 2 and 3, stealing several huge minions without complicated trades or spending removals.

6) Staff of Ammunae will keep the minions from getting damaged and make it easier to kill off bigger enemies. Alternatively, it may be used for dealing a massive damage to Icarax.[1]

7) Blade of the Burning Sun. Since most if Icarax minions will have large stats in the late game, this weapon will be able to compensate for them with a large attack of the player's minions.[2]

The first phase of Icarax is the most difficult. This is due not only because a hero power interacts well with the deck, mainly consisting of Rush minions, but also to boss' advantage in starting mana, which is not so noticeable in phases 2 and 3, if the battle started with them. Therefore, despite Icarax is the weakest of the Plague Lords, such a tempo will easily allow him to capture the board and defeat the player in the first few turns, if the player's minions are without Rocket Backpacks, do not have a reduced manacost/increased stats, or the player lacks of support (spells, weapons) at this time. Icarax can make any trades to benefit himself, as well as freely use any mass damage. It is worth noting that minions do not receive Immune, i.e. they are affected by any Destroy effects.

The main strategy is simple – to remove all enemy minions from the board. It is relatively safe to skip some turns only if AoE is planned on the next turn. Any minion that the enemy has left on the board can attack one of the player's minions for free. In most cases, it is worth to trade to the maximum, so that Icarax not only could not use the hero power, but other cards too that synergize with the damaged minions like Bloodsworn Mercenary or Plague of Wrath.

Icarax has a fairly large number of Rush minions, which means that he will be able to benefit from the hero power in any case by playing them in one turn. The most dangerous of these minions is Batterhead. If there are a lot of small minions on the player's board, it can easily kill all of them in one turn, simultaneously increasing the attack. If Icarax will get Batterhead by Akali, the Rhino, it can clear almost any kind of board so it is advisable to kill Akali as fast as possible and have a removal for any minion drawn by Akali. All of this is further supported by Woecleaver and The Boomship. The last one is especially dangerous since together with the hero power it can clean up most of the board and leave a couple of threatening minions. Due to that any small AoE is very useful in this phase. Even Whirlwind, Sandstorm Elemental, and other small AoE will often destroy 3-4 enemy minions.[3]

In the second phase, Icarax is Taunt Warrior and has two cards to strengthen Taunt minions (Into the Fray, Armagedillo). Though the character of the deck forces the player to trade with the boss' minions and often die from his hero power, it is much easier to play at this phase than at the previous one. This is due to the fact that the available buffs of Icarax and his AI are not enough to make an impenetrable wall of Taunt minions, as well as most of these minions do not have a high attack, making them easier for profitable trades. Since Wrath Smash is not AoE, this killing process does not bring Icarax an advantage in tempo, but only slightly reduces the damage received. In Normal difficulty, given the base cost of a hero power of 2 mana, it will be difficult for Icarax to use this hero power, and he will often miss it. However, in Heroic mode, it costs 0, which will greatly increase the frequency of its use. But regardless of difficulty the strategy is the same - keeping the full health of most important minions and do not give a boss the opportunity to do a little damage. In addition, the passive First Aid Kit will help to maintain a health perfectly. If possible, do not trade the biggest minions, or at least try to heal them after the trade. Alternatively, they are may be saved until the next phase and aren not played at all.

Another way to play around this hero power would be to keep all of the minions damaged (so that its cost is too high or takes up the entire opponent's turn). However, this may lead to Plague of Wrath, and in most situations this risk will not be justified. In general, it is advisable to go through this phase as quickly as possible, so that Wrath Smash would not draw out too many player's resources. If the fast game is not possible it is better to play the minions with average stats, then the losses would not be significant.

The hero power in third phase is again the same for both difficulties and works the same way as Topsy Turvy spell. It is important to note that the "damaged" minion will not be damaged after using and therefore such cards as Battle Rage or Plague of Wrath will stop working, which can be either plus and minus.

In this phase, Icarax buffs his minions with faster speed and tempo, since this buffing occurs primarily by the minions (i.e., Darius Crowley or Emeriss). Also there are much fewer low-value minions in the third phase decks, so The Boomship brings a lot of threat in comparison with phases 1 and 2. In addition to the fact that many boss minions will have increased stats, he can repeatedly "replenish" their health with the hero power. This can be especially frustrating with Frothing Berserker, Grommash Hellscream, and Gahz'rilla. And therefore this is the phase where such passive as Band of Bees or AoE like Addarah, Scales of Justice or Plague of Death will bring the biggest value.

Just continue the general strategy of playing around AoEs, counting them, and clearing an enemy board so he will not get extra value from Twist and damage synergies.

Reno Jackson
Okay you look really, REALLY mad! You must be wrath.
Sir Finley
Wrath? You have not felt wrath until you've earned the ire of… SIR FINLEY!
Elise Starseeker
History proves that pointless wrath leads to a swift downfall.
Brann Bronzebeard
Back under the ground with ye, Plague Lord.

Icarax, Plague Lord of Wrath
Anger can feed you... or destroy you!
Give in to your rage!

You think you can control your anger?
We shall see...

I have lain waste to the land of Uldum... and soon, all of Azeroth.
Good. Give in to your anger.

You cannot tame rage, dwarf.
You are already full of rage. Very good.

Anger is a poison without cure.
Revel in bitterness and rage!

Are you ready to get really angry?
There is still more hatred to spread.

Your fury radiates around you...
Now you are angry enough to face me!
Yes! You are truly incensed now.

Icarax, Plague Lord of Wrath
The longer you stay, the more you fall under my influence.

So FALLIBLE!
So PATHETIC!
So PITIFUL!
So WORTHLESS!

So FOOLISH!
So PALTRY!
So TERRIBLE!
So WEAK!

So AWFUL!
So HORRID!
So INFURIATING!
So SHAMEFUL!
So... INSULTING!

Icarax, Plague Lord of Wrath
Hatred is a fire that burns but never warms.
I am not always mad, but calming down makes me angry.
I do not just hate your face. I hate all of you equally.
I have the best insults. Competitors are mindless dolts.
Mortals take insults so personally.
The other Plague Lords are strong, but none so fierce as I.

I am REALLY annoyed now!

You are worthy of even greater ire!

Icarax, Plague Lord of Wrath
I will lay waste to all you possess!
It was made to be broken!
Nothing withstands my rage!

Cruelty is a strength.

Anger is an advantage!

Hate can even outlast death.

This beast has a very bad temper!

This is even sharper than my tongue! Hah!

Chaos in its purest form!

Meet your end in shame!

I knew you had it in you.

Ugh! Is that thing... cheerful?

That one can hardly stand!

Are you provoking me?

Icarax, Plague Lord of Wrath
Even those who fall to me feel my power!
I knew it. There is too much softness and kindness inside you...
Your blood must be boiling!

Icarax is unique to Hearthstone. It is one of the five sources of plagues that Rafaam has unleashed into Uldum. Icarax is the embodiment of the Plague of Wrath.