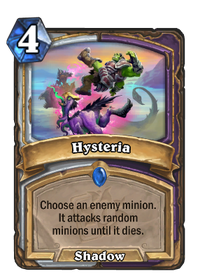 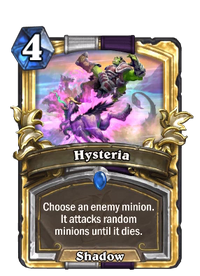 Choose an enemy minion. It attacks random minions until it dies.

"My mount and I share a special connection. Just not a good one."

Hysteria is a rare priest/warlock spell card, from the Darkmoon Races mini-set.

Hysteria presents Priest and Warlock with a powerful removal tool. So long as the board state allows it, Hysteria can clear a minion or two as well as the minion targeted. It is usually best to play this from behind on the board, as it allows the caster to clear a little of the opponent's board. The main targets will either be valuable minions that the player needs to kill as soon as possible or the largest minion on the board.

You can also cast Hysteria after summoning a minion, effectively giving the minion you just played Rush.

Minions retain their abilities while under Hysteria's effect. This makes Poisonous minions a major threat, or can turn the effects of cards like Twilight Runner and Neferset Thrasher into massive downsides.

Prior to Patch 19.4.1.72661, Hysteria could target both enemy and friendly minions. In Wild, it enabled a very effective OTK with Wretched Tiller, Deathspeaker, and Shrinkmeister. Targeting the Immune Wretched Tiller with 0 Attack would force it to attack 30 times, dealing 60 damage. Since the animation was incredibly long, this would often skip the opponent's next turn, making even Ice Block useless at stopping it.

Fixing this interaction did slightly hurt the utility of Hysteria. It could originally be used with Apotheosis for massive life gain, or cast on your own minion to destroy minions in Stealth.