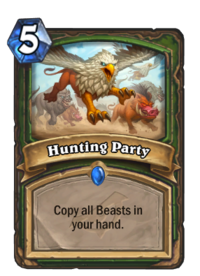 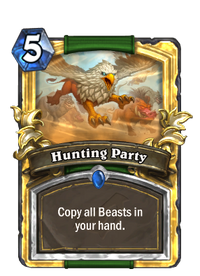 Copy all Beasts in your hand.
Flavor text

Not sure I'd call it a good party if everyone ends up beside themselves.

Hunting Party is a rare hunter spell card, from the Rise of Shadows set.

Hunting Party can be obtained through Rise of Shadows card packs, or through crafting.

This card provides a large amount of value generator in a deck running a good number of Beast cards, but the large loss of tempo to play the card makes it difficult to play.

Hunting Party can be used as a combo enabler using a beast whose cost is reduced with Scarlet Webweaver to create 4 copies of the beast, or fill your entire hand with them with Zul'jin.

Hunting Party is a passive Marksmanship hunter ability which causes the remaining cooldown of the hunter's Exhilaration ability to be significantly lowered whenever they kill an enemy.

One bug came up on July 1st with Patch 14.6.0.31761. It doubled effect on copying minions. For example, if a minion in hand has dire frenzy effect after copying the new minion will have doubled effect. The bug continue to reproduce at the next hunting party or Zul'jin. As a result, it allows player to create Vicious Scalehide with 7-9 stats (first effect) or 13-15 stats afterwards and so on[1].

The bug had been fixed on 4th of July.