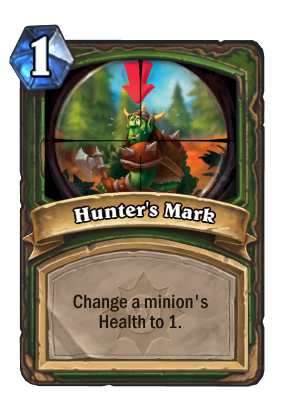 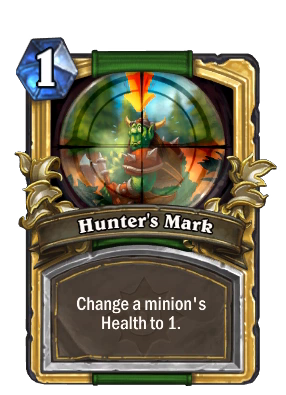 Never play 'Hide and Go Seek' with a Hunter.

Hunter's Mark is a hunter spell card, inducted into the Legacy set, formerly from the Basic set. 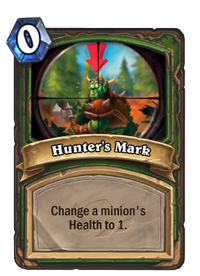 Two copies of regular and golden Hunter's Mark are automatically given after the player completes the Ranked's New player experience system, unlocking Wild and Classic format.

Useful when used with any card that can deal 1 damage to a target (like Elven Archer). Best used on high health enemy minions to maximize the effectiveness of the card. Also, because it sets a minion's maximum and current health both to 1 (leaving the minion effectively undamaged), Hunter's Mark removes Enrage effects from damaged minions.

"Ah, there you are..." —Sharpshooter Nally

In World of Warcraft, Hunter's Mark is a Marksmanship Hunter passive that allows Hunters' Arcane Shots to occasionally mark targets, allowing them to be hit by the ability Marked Shot.

The Hearthstone version is based on the ability's original and more recognizable incarnation: it used to be an ability that placed a debuff on a target, causing them to take 5% more damage from ranged attacks, and allowed the hunter to see the target even if they were stealthed or invisible. Its visual effect (a large red arrow over the target's head, not unlike what's seen in the artwork), became quite iconic.

Commentary: "Hunter’s Mark is an important option for Hunters, but it’s too efficient at 0 mana. We are increasing its cost to 1."