This article is using {{Card template}}.
See Help:Style guide/Card for how to edit this kind of article.
Edit this article
Hungry Ettin
46082 • LOOT_383
Regular 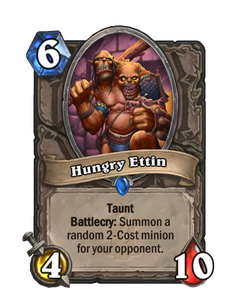 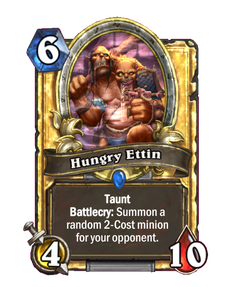 How can he be hungry… if he's Ettin!? 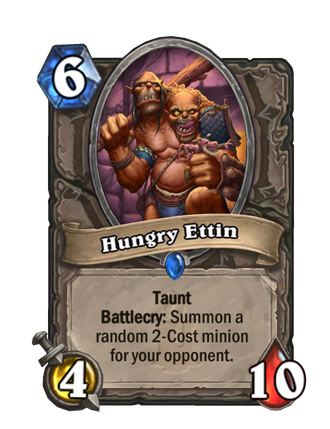 Hungry Ettin is a rare neutral minion card, from the Kobolds & Catacombs set.

Hungry Ettin has 14 stat points and a taunt, which is worth roughly 7 mana. Having a drawback worth 2 mana, it does not pass the vanilla test: what this means is that when Hungry Ettin is played and 2 mana, on average, is used to kill the summoned minion, a bigger minion could have been achieved, had the 8 mana been used to summon it in the first place. However, assuming an average statline of 2/3 on the summoned minion (and ignoring outliers like

Patient Assassin), Hungry Ettin is roughly equivalent to a 4/8 Taunt for 6 mana, making it reasonably efficient for its cost; compare, for instance, the 3/8

A list of collectible 2-Cost minions in Standard and Wild can be found here.

Ettins are a race of two-headed giants found in several highland areas around the Eastern Kingdoms, mostly in the Twilight Highlands, the Redridge Mountains and the hills and forests of Gilneas and Silverpine. They are also found in Highmountain on the Broken Isles.

The ettins of Silverpine came from Gilneas, and now wander the land searching for their next juicy meal, though the Forsaken have managed to subjugate and utilize some of them to haul their wagons throughout the forest. Many ettins have also been enslaved or recruited by the Twilight's Hammer cult.

The ettins of Highmountain seem to operate under some sort of hierarchy above their already existing tribal network, as Hill Prince Urgo, like his father before him, was destined to be the lord of all the hill ettin tribes in Highmountain. They build armor from stolen Gilneas houses and Suramar ruins, and some forge their own armor. The ettin of Highmountain eat tauren that have been cooked over bonfires.