Hearthstone Wiki
Register
Don't have an account?
Sign In
Advertisement
in: All cards, Wild format cards, Pages with no result queries, Plants

This article is using {{Card template}}.
See Help:Style guide/Card for how to edit this kind of article.
Edit this article
Humongous Razorleaf
41925 • UNG_844
Regular 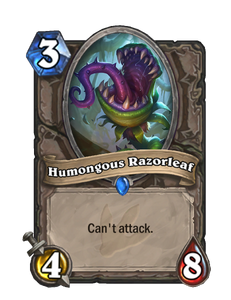 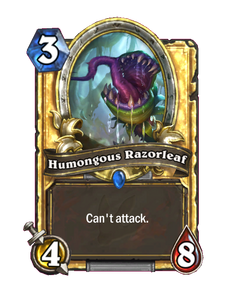 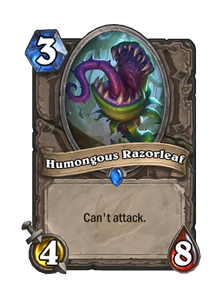 Humongous Razorleaf is a rare neutral minion card, from the Journey to Un'Goro set. 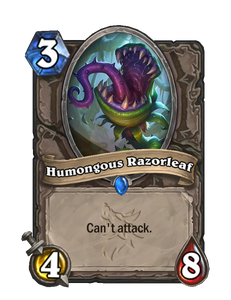 The Humongous Razorleaf comes into play with 4/8 but an inability to attack and may be used in a number of ways.

Abilities that give minions taunt such as Sunfury Protector, Defender of Argus and Mark of the Wild make it one of the cheapest mana:hp investments for a taunt.

Another option is to cast a Silence which removes the inability to Attack, making it a potent attacking minion in its own right.

Additionally, the Humongous Razorleaf can be useful as a low cost sacrifical minion for warlocks to use with Shadowflame or Void Terror. However, Ancient Watcher may be more useful in this regard due to its lower cost and same attack.

Unless able to make use of one of the above strategies, this card is generally a waste of mana. However, even without the ability to attack the minion may serve as a useful soft taunt, with opponents potentially wasting minions or removal effects on the Razorleaf in anticipation of one of the above strategies being put into play. It can also serve as a tank for absorbing random damage effects, such as from Mad Bomber or Knife Juggler.