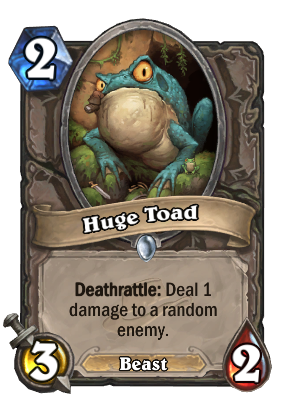 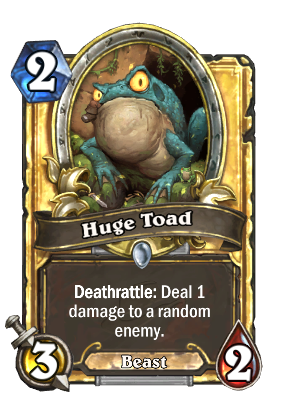 Deals damage when he croaks.

Huge Toad is a neutral minion card, from the League of Explorers set.

Two copies of regular Huge Toad are obtained by defeating Lord Slitherspear, the first boss in The League of Explorers's third wing, The Ruined City.

As a Wild-format card, both regular and golden versions of Huge Toad can also be crafted for the following amounts:

A strong early-game card, as it trades well on top of further hurting your enemies' board once it dies. This card is a strictly superior version of Bloodfen Raptor, offering its useful Deathrattle in addition to the Raptor's stats and Beast type.

Huge Toads are toad critters found in Hillsbrad Foothills, Swamp of Sorrows, Twilight Highlands and Zul'Drak. Their Pet Journal description simply reads, "This is a huge toad." However, despite their name these toads are still far smaller than the toad depicted in this card, suggesting that the connection may be in name only.

Hearthstone's Huge Toad is truly huge - the regular-sized toad at the bottom right of the card contrasting nicely with the other's massive form. Clearly the toad is happy to gobble anything it can fit in its mouth - which in this case is a quite a lot - attested to by the booted leg sticking out of its mouth.