This article is using {{Card template}}.
See Help:Style guide/Card for how to edit this kind of article.
Edit this article
Howlfiend
42642 • ICC_218
Regular 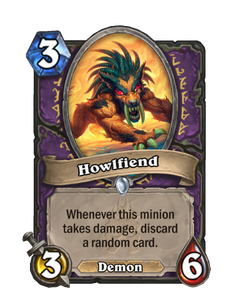 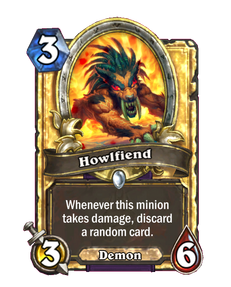 The problem is that he carries those cards in his mouth. 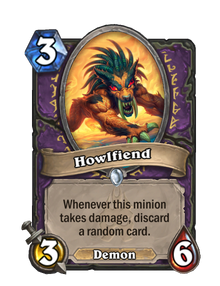 Howlfiend is a common warlock minion card, from the Knights of the Frozen Throne set.

While this card has better than average stats, it has an extreme downside to it. Similar to Bittertide Hydra, if unsupported its downside is severe enough to outright lose the game. If possible, this card should be played with little to no cards remaining on hand, and if you can play it with Malchezaar's Imp and keep it protected, it will allow you to cycle your deck, or at the very least mitigate its losses.

Although it's not appealing to use this card just for its stats, it does have some niche use to it. It can potentially speed up quest progress for Lakkari Sacrifice (but be very careful when playing it to complete the quest in order to not discard Nether Portal) or ramp up Blood-Queen Lana'thel's Attack more than any other discard card, although how much progress depends on the opponent's answer. It's also great for buffing Clutchmother Zavas, and the less cards you have remaining, the more you can potentially buff it to extreme levels.

It is also a great Treachery target, making them suffer its effect instead. This combo can be set up with Defile, Spreading Madness, or Dark Skies to force the opponent to discard multiple cards.

The Howlfiend is a bestial, demonic creature unique to Hearthstone. It bears some resemblance to felhounds and felstalkers.