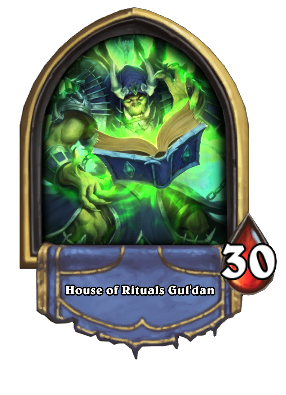 For other representations of Gul'dan, see Gul'dan (disambiguation).

House of Rituals Gul'dan is an alternate hero for the

House of Rituals Gul'dan can be purchased through Shadowlands Bundle, which also contains Ember Court Illidan, Winter Fury Malfurion, and Ascended Uther and lasts from September 21 to October 12, 2021.[1]

Once unlocked and selected for use, House of Rituals Gul'dan replaces Gul'dan whenever the player uses a Warlock deck, as well as:

When viewed in the Collection, House of Rituals Gul'dan has the following flavor text:

Unwilling to atone for his evil deeds, Gul'dan decided to just commit more of them.
Obtained by purchasing the Shadowlands bundle.

Most of House of Rituals Gul'dan's sounds are the same as Gul'dan. Unique, different ones are noted as Unique in References section.