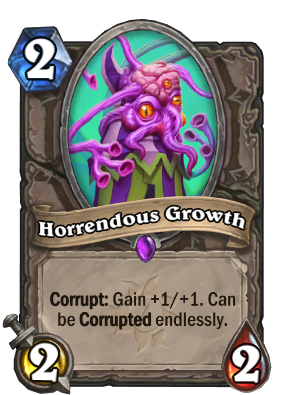 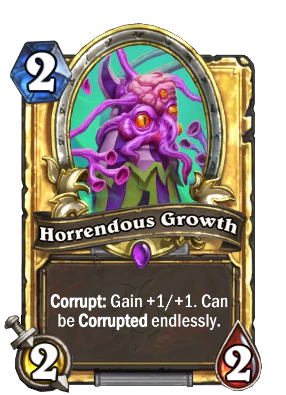 Stop picking at it! You’re only making it worse.

Horrendous Growth is an epic neutral minion card, from the Madness at the Darkmoon Faire set. 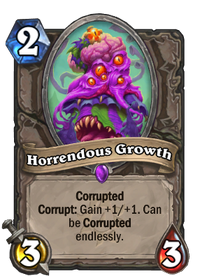 Horrendous Growth has the potential to become an incredibly large minion, if slow to enable. Decks that run many cards that cost 3 or more will get the best use out of it; you may be able swap our some common utility cards for more expensive alternatives in order to Corrupt this card more frequently and reliably, but doing so will hurt your ability to contest faster opponents in the early- and midgame. Later in the game, it's best to drop Horrendous Growth alongside another card in order to make up for its lack of immediate value; try using it as a follow-up to a board clear, playing it alongside a more immediately useful minion, or granting it useful abilities with a card like Animated Broomstick, Charge, or Ironbark. In a Corrupt-focused deck, you will likely run a myriad of cards that corrupt this, and it can be an additional large body to summon off of Y'Shaarj, the Defiler's Battlecry. Dark Inquisitor Xanesh will set this card's cost to 0, allowing nearly every card you play to grant it +1/+1 and thus making it grow much more quickly.

The fact that Horrendous Growth's base stats increase as you Corrupt it (as opposed to applying an enchantment) can be an asset in a number of ways. If added back into your hand with a card like Sap or Seance, you can replay it very cheapy and add another copy to your Y'Shaarj pool. Rally! and Mass Resurrection will bring back Horrendous Growth with full stats, and Silence effects will fail to return it to a 2/2.

There are 2 achievements related to Horrendous Growth.