This article is using {{Card template}}.
See Help:Style guide/Card for how to edit this kind of article.
Edit this article
Holy Wrath
435 • EX1_365
Regular 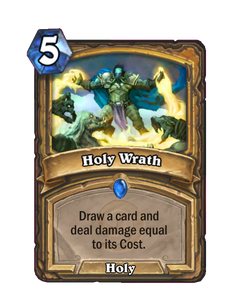 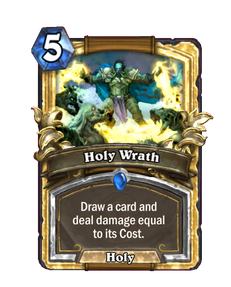 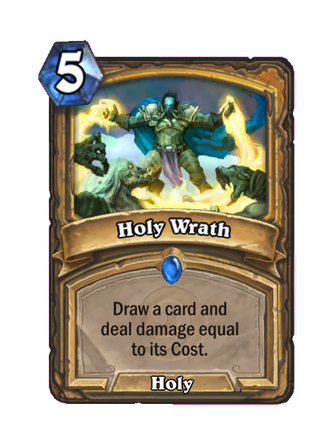 Holy Wrath is a rare paladin spell card, inducted into the Legacy set, formerly from the Classic set. 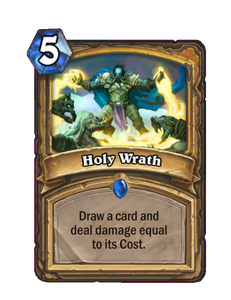 Holy Wrath should be played in a fairly high mana deck for obvious reasons. Since the cost of this card is a bit higher and the damage is not reliable, it's for most purposes better to pick

Hammer of Wrath for card generation.

This spell is particularly useful when the paladin has very high mana cost cards in their deck. Conversely, drawing a low mana cost card will render Holy Wrath extremely inefficient. As mentioned in this card's flavor text,

Molten Giant is one of the highest mana cost cards in the game by a substantial margin, and drawing it with Holy Wrath can deal a whopping 20 damage to the opponent (

Shirvallah, the Tiger can alternatively be used to deal 25). With

Hemet, Jungle Hunter and a deck filled with low-cost cards, you can have a much better chance of drawing those expensive minions from your Holy Wrath.[9] A more guaranteed method is to empty your deck, play the minion for 3 or less Mana, shuffle it in with

Baleful Banker, then draw it with Holy Wrath.

To be able to deal reliable damage using cards like

Lorekeeper Polkelt while this card in your hand to always draw

Shirvallah, the Tiger for 25 damage.

Holy Wrath is based on the paladin ability of the same name from World of Warcraft. The ability shoots bolts of power in all directions, causing Holy damage, and stunning demons and undead.