This article is using {{Card template}}.
See Help:Style guide/Card for how to edit this kind of article.
Edit this article
Holy Smite
279 • CS1_130
Regular 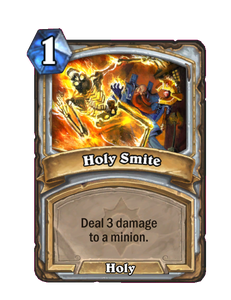 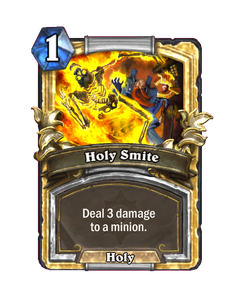 It doesn't matter how pious you are. Everyone needs a good smiting now and again. 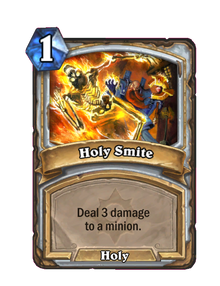 Holy Smite is a priest spell card, inducted into the Legacy set, formerly from the Basic set. 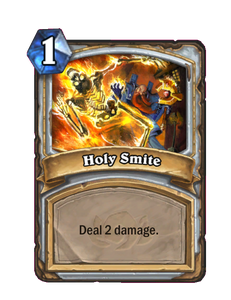 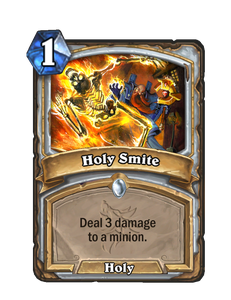 Regular and golden Holy Smite are uncraftable and cannot be crafted or disenchanted.

Two copies of regular Holy Smite are obtained for raising priest to level 1.

Holy Smite (Core) is uncraftable and cannot be crafted or disenchanted.

A cheap direct damage spell, useful for destroying enemy minions or removing Divine Shield. Although it can't target the enemy hero, Holy Smite has one of the best cost-to-damage ratios of any single-target removal spell. It's especially useful against aggro decks as an even faster Shadow Word: Pain.

Smite is a priest spell from World of Warcraft, renamed from "Holy Smite" prior to the game's release. A simple cast-time attack that deals Holy damage to the target, it is the first spell that priests learn when they begin the game. While priests levelling in Healing specs may use it deal damage to mobs, at higher levels its use is less important, since these specs generally focus on healing rather than dealing damage. However, Discipline priests use their Atonement passive to allow their Smiting to generate healing for friendly targets, making the spell a regular part of these priests' rotations, especially during quieter periods.