This article is using {{Card template}}.
See Help:Style guide/Card for how to edit this kind of article.
Edit this article
Holy Fire
1365 • EX1_624
Regular 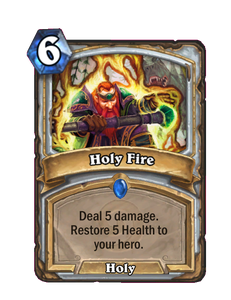 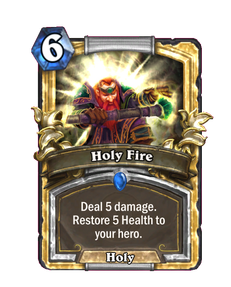 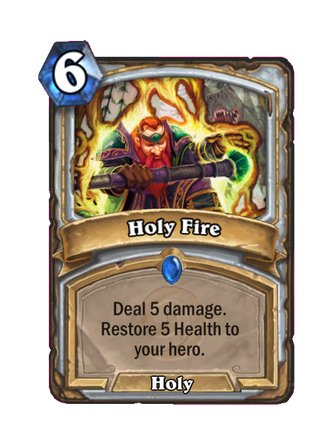 Holy Fire is a rare priest spell card, inducted into the Legacy set, formerly from the Classic and Hall of Fame sets. 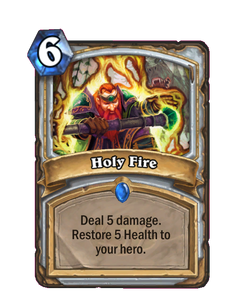 This is one of the priest's big removal spells, capable of removing powerful minions in a single strike, or weakening giants such as Ragnaros or

Molten Giant in order to allow another attack to finish them off. In this respect, it shares a place with

Shadow Word: Death for use as powerful removal, mostly in the late game. Its 5 damage makes it particularly effective against tricky 5 Health minions such as

However, Holy Fire also heals the priest for the same amount. This makes it very useful for simultaneously removing threats and restoring the priest's Health, potentially moving them out of reach of lethal. When facing burst-prone opponents at low Health, the priest can use Holy Fire upon even minor targets (or the enemy hero) with the main purpose of restoring Health. Combined with

Lesser Heal this will restore 7 Health in a single turn.

Even without the threat of imminent defeat, Holy Fire can be a handy way of keeping the priest's Health up while also removing threats from the board. Alongside

Holy Nova, it is an effective part of the priest's self-healing arsenal, allowing the priest to casually maintain high Health levels without sacrificing focus on the rest of the game.

Bear in mind that the heal can only be made use of if the priest is below maximum Health. However, if the need arises to make use of the spell for removal, it is generally not worth hesitating due to being at full Health; the advantage gained through removing a powerful threat is generally more important than the potential for healing later in the game.

It is worth noting that, as with all healing effects, in combination with

Auchenai Soulpriest this spell's healing will be turned to damage, dealing 5 damage to both the target and the casting priest. This can reduce the card's value when the priest has Auchenai on the board, but it is often worth the damage in order to make use of the spell, as long as it does not take the priest's Health critically low.