This article is using {{Card template}}.
See Help:Style guide/Card for how to edit this kind of article.
Edit this article
Hobgoblin
2072 • GVG_104
Regular 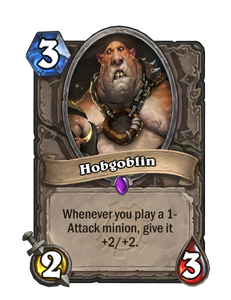 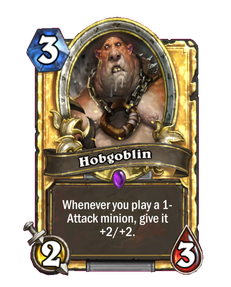 Hobgoblins are meeting next week to discuss union benefits. First on the list: dental plan. 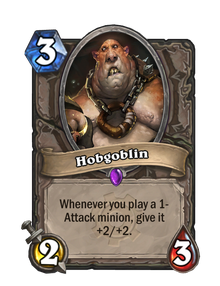 Hobgoblin is an epic neutral minion card, from the Goblins vs Gnomes set.

The ideal combo pieces are minions who can protect it with the stat boost: small Taunt minions like Voidwalker or control minions like Nerub'ar Weblord. He can also buff engine-drivers like Jeeves, but the opponent will likely kill Hobgoblin in short order. Other good cards that combo well with the Hobgoblin are minions like Mana Wyrm or Micro Machine which have an ability that buffs them over time. The extra 2 Health allows them a chance to survive long enough to see multiple stat increases on top of the Hobgoblin's buff.

The following tables list all 1-Attack minions available in Wild format, reflecting the range of possible minions that can receive Hobgoblin's effect.

Note that the following uncollectible minions generally require a return effect such as Time Rewinder in order to play them from the hand.

Hobgoblins, also known to some goblins as brutes or oafs, are large semi-giants that guard the Isle of Kezan's cities, such as the Undermine. The Hobgoblins were once goblins altered by some foul alchemy becoming tough, powerful, and "dumber than an ogre with a hangover".