This article is using {{Card template}}.
See Help:Style guide/Card for how to edit this kind of article.
Edit this article
Hobart Grapplehammer
40482 • CFM_643
Regular 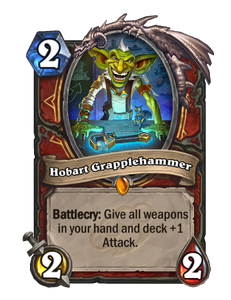 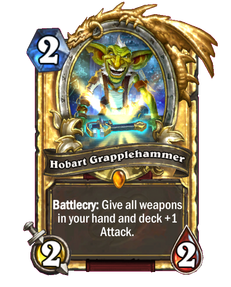 Grapplehammer is the horrible mind behind the Automatic Piranha Launcher (banned in 7 districts)! 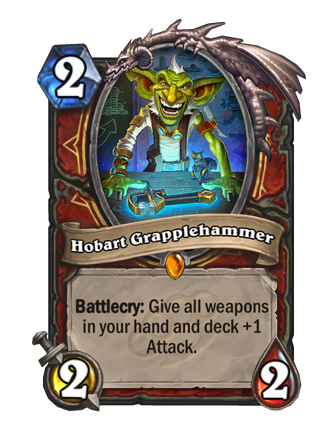 Hobart Grapplehammer is a legendary warrior minion card, from the Mean Streets of Gadgetzan set.

Hobart is best used in a deck with lots of weapons, allowing him to gain a large amount of value. Being a 2 mana 2/2 with a long-term effect, he is slightly too slow for aggressive decks, making him ideal for Control or Tempo Warrior.

He works extremely well with

Hobart Grapplehammer is a goblin quest giver first seen in the KTC Headquarters on Kezan experimenting with new products. When the place is destroyed by the volcano he escapes with the rest of the survivors to the Lost Isles and then is later found at the Southern Rocketway Terminus in Azshara.

Hobart is also one of the dozens of past NPC's encountered by adventurers to assist in killing the elementals at Sethria's Roost.

During the Burning Legion's third invasion, he traveled to Dalaran where he sells engineering supplies.

Hobart Grapplehammer is the genius behind many products brought to the Kajaro Trading Company. Such as Kaja'Cola, the Poultryizer, Town-In-A-Box, Lab-In-A-Box, the Ingenious Cap of Mook Foolery, KTC Train-a-Tron Deluxe, the Amazing G-Ray, Never-Deflating Pool Ponies, The Big Ones, Warrior-Matic NX-01, and gilgoblins. However, he's been advised to not claim the gilgoblins by his counsel, due to a negligence case brought up over them.

Before the eruption of Mount Kajaro, Hobart was working on two new projects, the Micro Mechachicken and Subject Nine.

While on the Lost Isles he designed and built the greatest fighting submersible of all time, the Mechashark X-Steam.

In Hearthstone lore, Hobart appears to have instead joined up with the Grimy Goons to serve as a weapon supplier.

Grapplehammer is a talented guy, and his people dole out upgraded gear through the city’s pawn shops. It’s not just hardware neither; we also got access to some pretty scary beasts from da Arena! Basically, Goons stick together and we got all the best toys, so you ain’t never gonna get into a fight without some back up. Even the littlest guy can be a heavy hitter with the right pea-shooter in da violin case.[1]