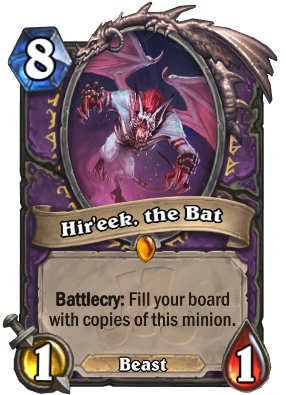 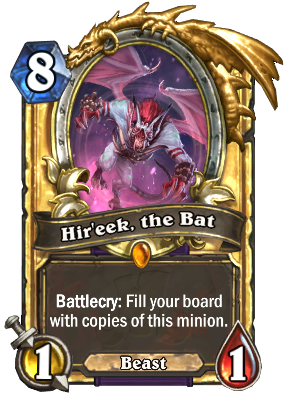 On his own, Hir'eek can provide up to seven 1/1 minions for the cost of 8, which is often not particularly valuable for its cost and creates a board state highly vulnerable to area of effect attacks (comparable with Onyxia, who is 1 mana more expensive but has 8/8 in stats in addition to swarming the board with 1/1 minions). As a result, Hir'eek is best used in conjunction with cards that buff his stats while he's in the player's hand, such as Soul Infusion and Spirit of the Bat.

One of the biggest worries as a Warlock card is to discard Hi'reek. Because of this Soul Warden is essential in any deck that runs any of the classic high value discard cards. If you can get Hi'reek to 3/3 he already becomes worth playing, but due to the strength of hand buffs its completely possible to get him up to 5/5 or higher.