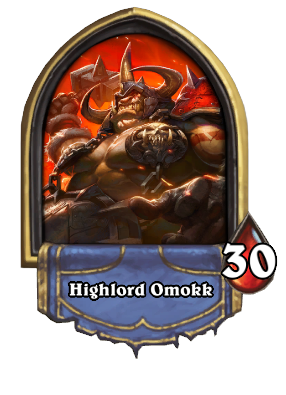 Much evil remains in the top half of Blackrock Mountain. Time to climb up!

Highlord Omokk is a boss encounter found in the Blackrock Mountain adventure. It is the first encounter of the adventure's third wing, Blackrock Spire. 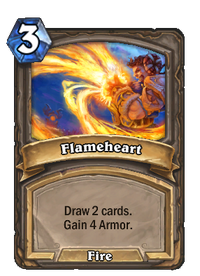 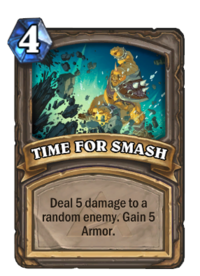 In Normal mode, Omokk's Hero Power requires a damaged enemy minion in order to be used. You can counter this through healing, with priests excelling with Lesser Heal, Circle of Healing and Holy Nova. The healing is especially valuable for saving larger minions, whose continued presence can be key to winning the encounter.

Minions with Deathrattles such as Harvest Golem, Haunted Creeper and Piloted Shredder can be useful for surviving Omokk's destructive effects. Resurrect can help recover valuable minions.

Also in Heroic mode, above-mentioned minions can be crucial for winning. Nerubian Egg is basically a 4/4 minion for 2 mana, which, however, dies after one round of combat. Mage, rogue, and druid are good choices for Heroic mode, as 6 minions in Omokk's deck have one health, so they can be pinged down without having the need of putting a minion on the board. A powerful card to secure a win against Omokk is Kel'Thuzad, as Omokk has no spell that can take care of him in a guaranteed way---with deathrattle minions, Omokk will basically fill the board with minions for you, making it unlikely that his Hero Power hits Kel'Thuzad himself. 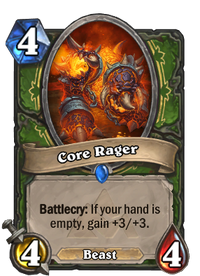 Nefarian
Greetings, Slayer of Ragnaros! Umm, what are you doing in Blackrock Spire?

Highlord Omokk
Me smash! You die!

Nefarian
Why are you here? Ragnaros is dead. You should be celebrating with your friends.

Nefarian
I am confused. There are no Ragnaroses up here. Your quest is complete. Go home.

Omokk didn’t rise to Highlord by being sharp. Quite the opposite—he’s the very definition of a blunt instrument, and he’ll be ogre-joyed to pound you and your minions into dust. You’ll have to ogre-throw this beefy bad boy if you hope to make it any further up the Spire.[1]

Highlord Omokk is a level 57 elite ogre mini-boss found in Lower Blackrock Spire. Though he appears to be the leader of the Spirestone clan, he is actually a proxy for the true leader, Urok Doomhowl.

Omokk rules over the spire's ogres with an iron fist. Many underlings have challenged him to single combat in the hopes of seizing the highlord's title, but all have fallen without landing a solitary blow. This mysterious phenomenon has led to rumors that dark magic is protecting Omokk.